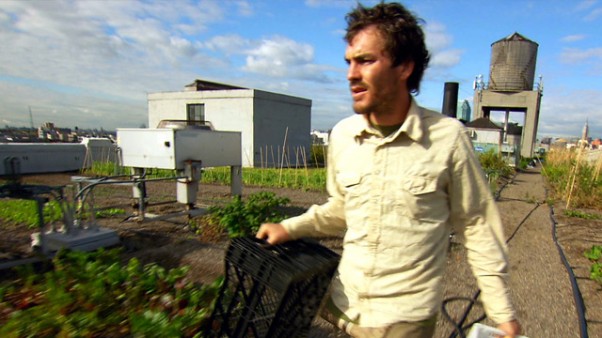 Ben Flanner’s goal is to utilize all of New York’s neglected rooftops, alleys and loading docks for organic enterprise. His vision is to incorporate green food production and consumption into the everyday life’s of city dwellers lead to the founding of the Brooklyn Grange and his contributions of produce to local farmers markets all around the metropolis.

What’s wrong with the way we eat today in the U.S?
I think we’ve kind of reached a point where people are a bit frustrated with the sources of food and large food production across the country. A lot of people are starting to care more and they want to know for sure that pesticides and chemicals were not used in what they’re eating.

What can we do to make it right?
I think Americans can definitely eat a lot more fresh produce. It tastes great, especially when it’s freshly picked. It’s easy to get access to when it’s grown very close to you. You can taste the difference, it’s more nutritious, and there are less fats and preservatives and chemicals in the goods. I think organic produce is definitely important for Americans.

When did you start urban farming and why?
In the last several years I became really interested in agriculture, growing food and all the problem solving of organic farming, the food itself and all the challenges that you have to endure and solve. I just became really interested in farming. Also, the desire to stay in the city because that’s where my life is; that’s where all my friends are, and I love the city.