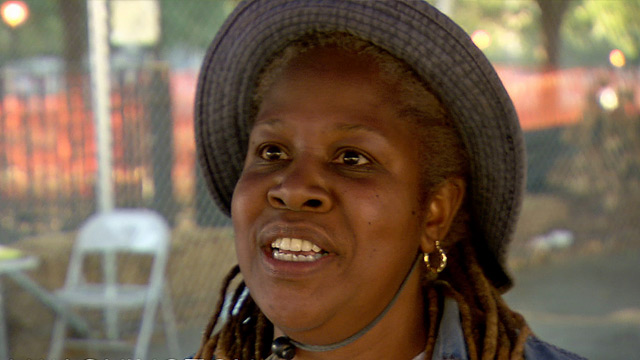 “You know sometimes people think food is a privilege. Food isn’t a privilege, it’s a right. And we want people to exercise that right to fresh, healthy produce in their neighborhood, and that’s what we’re all about.”

Growing up in the inner-city, Karen Washington dreamed of having her own farm and cultivating many of the traditional foods she enjoyed cooking for her family. In the mid-1980’s Karen settled in the Bronx borough of New York and founded a community plot, appropriately named the ‘Garden of Happiness’.

What’s wrong with the way we eat today in the U.S?
You’re starting to see health problems in children: diabetes, obesity – really things that you normally would see in an adult. When they started eating those fast foods, all of a sudden the high blood pressure! People are starting to make that very important connection to the food that they eat and health. And that’s major.

What can we do to make it right?
As we go forward in this urban agricultural movement, I want to see the future of urban planning that urban agriculture is part of that. It’s not only about building buildings but, its building communities and building areas where we can grow food. I’m not saying that in a metropolis that we will be able to grow food for the millions and millions of people. But what we will be able to do is really have a landscape where people will understand where their food comes from, have an opportunity to grow some food and have an opportunity to be cohesive in the movement.

When did you start urban farming and why?
Well, I remember being a little girl maybe 6 or 8 years old, getting up Saturday morning – and before Saturday morning cartoons was the farm report. I used to watch the farm report and I said, “Oooh I want to be a farmer… I wish I grew up on a farm.” So, even as a young child I had something inside of me that just got me hooked on farming. And I lived in the projects in the city! Who would have thunk it? That at the age of 56, I’m here as an urban farmer enjoying farming and growing food and really getting that message out. So there’s hope for all.