Across American history, waves of immigrants came to the United States to do the hard work of building America’s infrastructure and toiling in its industries. And when they got hungry, they needed filling, mobile food that could be taken into the coal mines, factories, or the fields. Enter: the hand pie, the original convenience food, found at the intersection of labor, food, and migration. Whether sweet or savory, these convenient pockets are filled with ingredients signature to various cultures. Vivian’s need to learn how to mass produce hand pies inspires her to revisit the applejacks of her youth.

Her first stop is to the North Carolina company whose version of the sweet treat fed thousands of mill workers and now lines the shelves of convenience stores and gas stations across the Southeast. That hand pie lesson prompts a trip to West Virginia’s coal mining country, which offers a taste of their signature pepperoni rolls made by Italian immigrants who used what they had to create what became an ubiquitous treat inside coal miners’ lunch pails.

Finally, a romp around her home state offers Vivian the opportunity for a deep delve into the world’s most popular hand pie — the empanada. She samples empanadas from a Puerto Rican-Southern food truck feeding office workers and at a Latin festival to celebrate farmworkers. She spends time with a family whose Mexican roots date to before Texas was a state and their hand pie tradition illustrates the story of Jews avoiding persecution during the Inquisition. 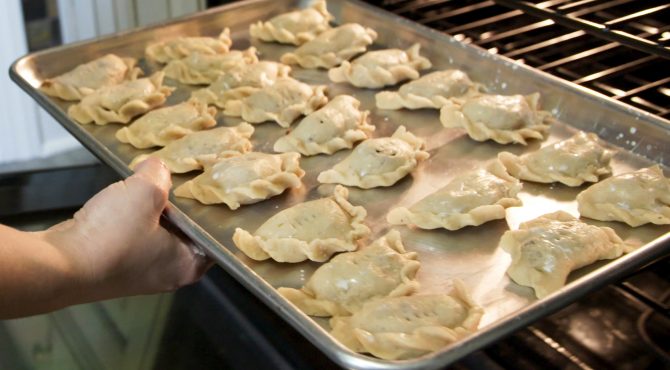