While cooking a charity dinner with Southern-Korean chefs, Vivian spins out her version of French gnocchi to be served alongside Asian dumplings descended from the Chinese royal court tradition. During their discussion, the chefs realize that while they all understand what a dumpling is, they can’t actually define it. On her quest to figure out that conundrum, Vivian quickly learns that no one culture can define a dumpling.

She heads to Mississippi to visit with longtime Chinese communities in the Delta for a complicated history lesson over dim sum. While the dumpling serves as a filling way to use up what you’ve got in the kitchen, it also always centers as a story of celebration. Vivian learns more about that through generations of Jewish women in Jackon, Mississippi, who make matzoh ball soup. All these travels lead Vivian to return home for more dumpling exploration. Vivian goes on a tour to taste her favorite Italian-style dumplings in Durham, North Carolina, for a quick study in dough-rolling and forming. That leads her to revisit one of her classic comfort food memories back home: chicken pastry.

The dumpling — in all its folded and filled or doughy glory — resists easy definition, and invites a revealing look at communities that further broaden common perceptions of what it means to be, and eat, Southern. No matter what they are, dumplings stretch our ingredients and our imagination. 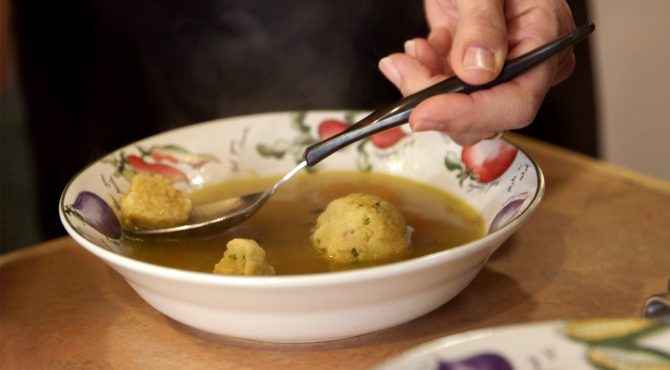 This recipe is from Petra Kay, whose matzo ball-making skills are well known in Jackson, Miss. See The Recipe