Somewhere South: What a Pickle

Vivian is tapped to give a lecture on the wide world of pickles at the first ever Chow Chow Festival in Asheville, N.C. Her turn as a pickle professor sparks a deeper look at the funk and acidity that fermented or vinegar pickles bring to most meals and how those pickles make a belly-filling bowl of rice or grains so much more delicious.

While in Asheville, Vivian tastes an array of Indian pickles — some preserved the subcontinent’s traditional way in oil with spices— with the chefs behind the Brown in the South dinner series. The Brown in the South dinners are a collaboration among chefs of Indian and Southeast Asian descent who call the American South home and dishes inspired by both places. The dinners are meant to spark discussion among the chefs and the diners about Southern identity and how long one must live in the South before you can claim it as your home.

Vivian then ventures to Lexington, Kentucky for a pop-up dinner that puts Sri Lankan pickles front and center. She gets a lesson on how to make Puerto Rican escabeche and sees how chow chow is made in the hollers of eastern Kentucky. 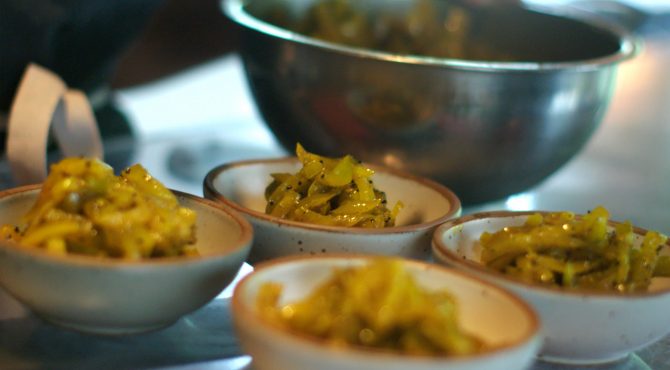 This recipe from chef Cheetie Kumar of Garland in Raleigh, N.C., who replaced mango in mango pickle with green tomatoes and watermelon rinds. See The Recipe