The harvest is over, winter has set in, and were reaching the end of the calendar year. Whether you celebrate Christmas, Hanukkah, or Kwanzaa, its a time when decorations go up, children receive gifts, and families gather together to share a meal.

Japans equivalent is called Oshogatsu, and its celebrated on the first day of the New Year. While Western influences have turned Christmas into a pseudo-holiday in Japan, Oshogatsu is still the holiday when families head over the river and through the woods to grandmas house.

Growing up in the US, I wasnt able to return home for Oshogatsu every year, but my mom still kept the spirit going with decorations, gifts, and food.

One traditional Oshogatsu decoration is Kagami Mochi, or mirror rice cake. The two rice cakes stacked atop one another is said to represent the passing year and the coming year. On top of the rice cake is a Daidai, a variety of mandarin whose leaves never fall, even during winter. The word daidai also means generations, and so including the Daidai in the decoration represents a prayer to continue the family line.

During Oshogatsu, kids receive colorful envelopes filled with money from family members called Otoshidama. Originally, toshidama was an offering to the god of a shrine during New Years. Over time it became a gift for kids, which is often spent the day after New Years, during Japans biggest shopping day of the year. 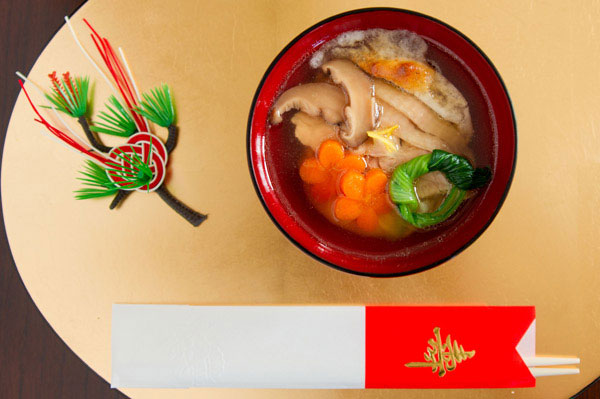 While there are many traditional dishes eaten for Oshogatsu, each one with a special meaning, Ozoni is the quintessential one bowl meal that defines the New Years experience for most Japanese.

Some more unusual examples include the Ozoni from Kagawa prefecture, where the mochi has sweet red bean paste inside and in Okayama prefecture, the Ozoni contains yellowtail and clams.

In Tokyo, Ozoni is made with a clear chicken broth seasoned with soy sauce. I like the earthy rice cracker flavor that mochi takes on when toasted, so I always toast my mochi. If you want to get fancy, you can carve the carrots into the shape of a five petaled cherry blossoms and tie the spinach into a loop, but if you’re pressed for time, the shape wont effect the flavor.

Whatever traditions your family celebrates, enjoy your holidays! Or as we say in Japan: Yoi otoshi o omukae kudasai!

Food blogger Marc Matusmoto shares his family recipe for Ozoni, a central dish for Japan's Oshogatsu holiday that is celebrated on the first day of the new year. Marc shares the story behind the holiday in a full post on the Fresh Tastes blog.

If you can't find yuzu, you can substitute Meyer orange peel