Is Civet Coffee Made From “Cat Poo”?

If youve ever had a cup of Java, you know that Indonesia is famous for its coffee. A colloquialism that developed from its eponymous island in Indonesia, Java isnt the only island in Indonesia where coffee is produced. In fact, the thousands of islands that form Indonesia make it the fourth largest producer of coffee in the world.

But amongst a growing group of coffee connoisseurs, theres one type of coffee that Indonesia is particularly famous for. Its the home of Kopi Luwak, or civet coffee. Infamous for its high price and unconventional production methods, locals have affectionately named it cat-poo-ccino. Cute, until you think about what the name actually means.

If you just threw up a little bit in your mouth I cant blame you, I certainly had a similar reaction the first time I heard about it at a café in New York City. And yet here I was, thousands of miles from home in the middle of a mountainous region of Bali. In front of me was a small white cup filled with a thick black swill that s seen the rear end of a critter that looks more like a giant rat than your neighbors pet calico.

If the word civet sounds familiar you may remember them as the species of cat that transferred SARS to humans nearly a decade ago. How could anyone have thought this was good idea, I quietly wondered to myself.

Just then, I must have looked visibly repulsed because the young ladies serving the coffee were looking in my direction, pointing and giggling. Feeling like a hypocrite, I began to regret the fact that I frequently declare that Ill try anything once. Was this where Id draw my gastronomic line in the sand?

Kopi Luwak has a history almost as long as coffees production in Indonesia. Formerly a Dutch colony, plantation owners forbade workers from picking coffee beans for their own use. I can only imagine that a mix of curiosity and desperation drove some adventurous soul to pick up the beans left behind in the droppings of the civet, wash them thoroughly, roast them, and brew them into the first cup of cat poo coffee.

Word quickly spread of this new form of coffee, but due to the limited number of beans that could be harvested this way, the price quickly went up, making it a beverage that could only be enjoyed in Indonesia.

It wasnt until relatively recently that Kopi Luwak started being exported in larger quantities, but increased demand from the West has led to other coffee producing countries such as Vietnam and the Philippines to produce their own versions. Its even spurred a black market of knock-offs, which are treated with chemicals to mimic the effects of passing though the cats digestive tract.

Back in Bali, I managed to subdue my gag reflex, and took a sip of the viscous brew. I was looking for a hint of feline funk or musk that would give away its provenance, but to be perfectly honest, there was nothing disagreeable to be found. Despite its thick consistency, this was the smoothest coffee Ive ever consumed.

The most notable difference is that it lacks the acrid bitter notes that coffee usually has; thats why it can be brew so strong. Were talking thick black sludge-at-the-bottom-of-your-cup strong. Normal coffee brewed this strong would be undrinkable, and yet this full-bodied brew was complex, nutty, and utterly smooth.

Enzymes present in the civets digestive tract are absorbed by the beans, which in turn transform the proteins responsible for the coffees taste. After being defecated, the droppings are washed until clean, the yellow husks are removed, and the beans are lightly roasted.

At a price point over $180 a pound I wont be switching to catpooccinos anytime soon, but if I find myself back in a part of the world that produces this special brew, Id order the Kopi Luwak without a second thought. 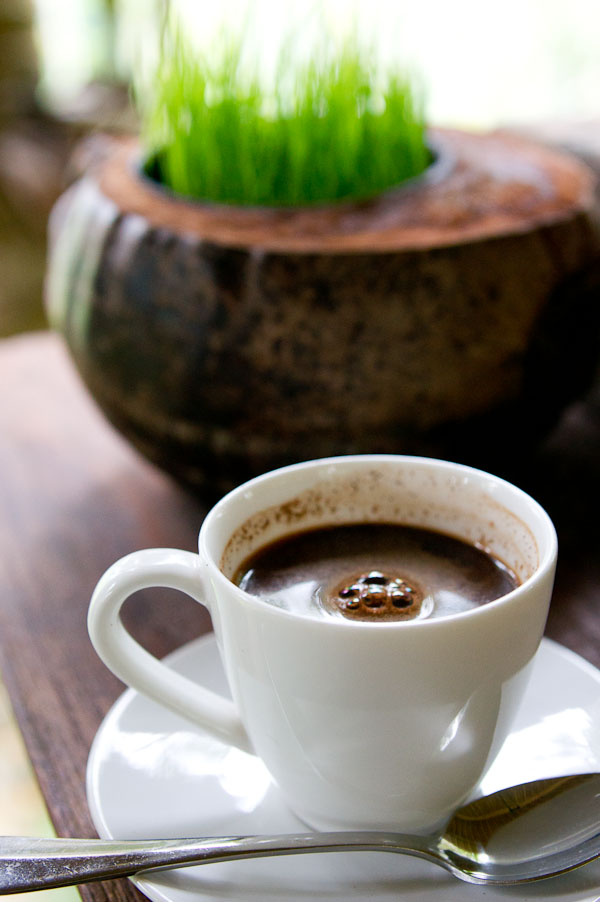