Five Reasons to Use a Kitchen Scale 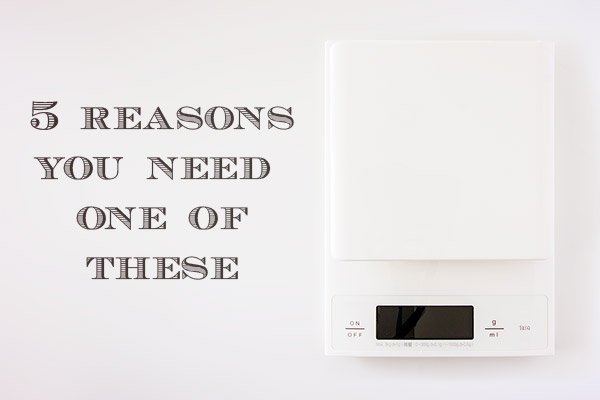 You may have noticed that Ive started including weight measures wherever possible. You may have even been a little annoyed by this practice (as I once was). But theres a good reason for why Im doing this, and thats because volumetric measurements (cups, tablespoons, teaspoons) are the wrong way to measure large amounts of anything that is not a liquid.

Its not that volumetric measurements are inherently bad, but theyve long been misused, and provide a false sense of accuracy when in fact they can be wildly inaccurate. Take flour for example. Its a loose powder with a lot of air between each particle of wheat. This means that it can be compressed, which drastically alters the amount of flour that can fit into one cup. Depending on variables such as your angle of approach, the force with which you scoop and the shape of the measuring cup, you could be adding way too little or far too much into the dishes that you make.

The differences can be even bigger for leafy items like herbs, which are often measured volumetrically, or even worse, by approximation. Does a quarter cup of basil mean that its so densely packed that theres no air between each leaf or does it mean loosely? If its loosely packed, then how big are the leaves supposed to be, because different sized leaves will settle with different amounts of looseness. And what does a sprig of thyme or a handful of parsley mean anyway? How big is a sprig? How big is your hand? Are you confused yet?

And then there are items such as tomatoes and onions. I dont know about you, but the last time I checked, they came in a huge variety of sizes. Even using descriptions such as small or large is pretty meaningless in a world with melon-sized heirloom tomatoes, pea-sized cherry tomatoes, and everything in between.

So heres my list of 5 reasons why you should have a digital scale in your kitchen.

So which camp are you in?