Explore the Food of a Matsuri Japanese Festival 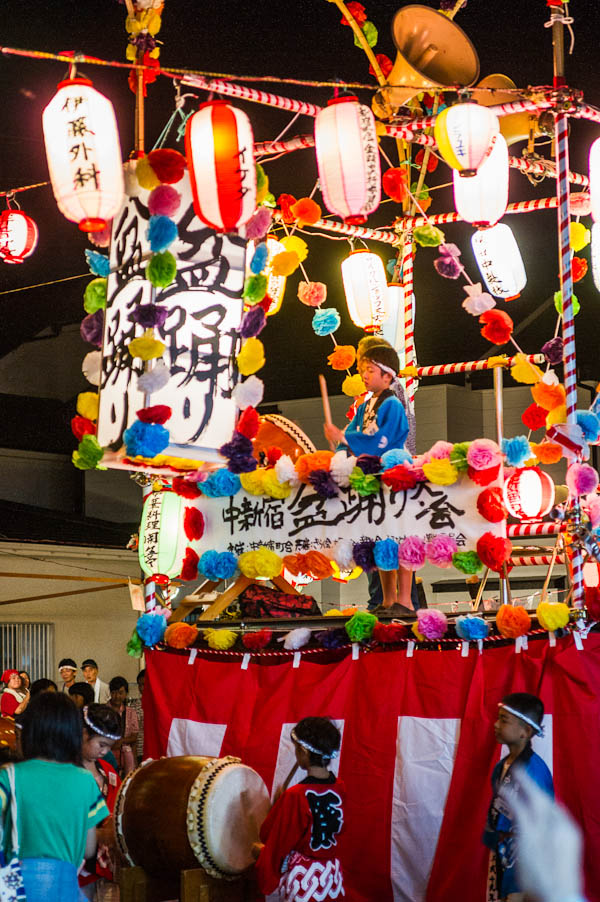 While there are matsuri (festivals) all year long in Japan, summer is when theyre at their peak. Like a local fair, the dates vary from place to place with many festivals celebrated at the city or even neighborhood level. 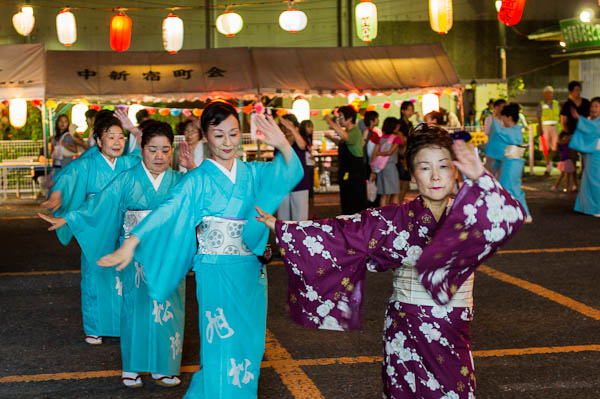 Themes range from celebrating the harvest to remembering the dead. Bon Odori is a matsuri thats typically held during Obon (known as the ghost festival in other parts of Asia) where locals come out dressed in yukata (a light cotton kimono) and dance to the beat of a taiko drum. 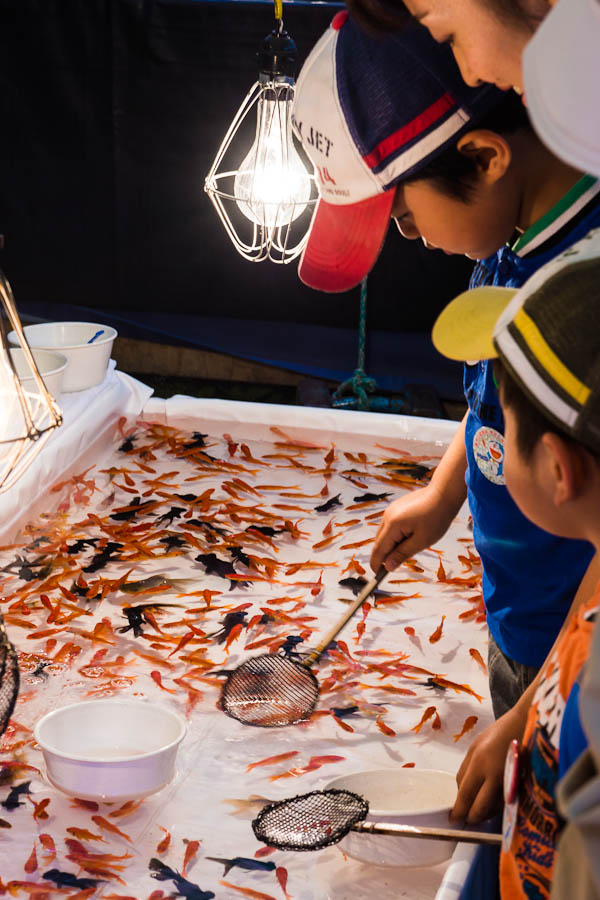 Whenever theres a matsuri, theres bound to be games for the kids. This one is called kingyosukui, which literally means scoop the goldfish. As the name implies, the object is to us a fragile paper net to scoop up as many goldfish as you can before the net breaks.

But for me, the most important part of a matsuri, is the food. Its unhealthy, a little trashy, and about as far as possible from the food most people associate with Japan. Heres a guide to some matsuri favorites both old and new: 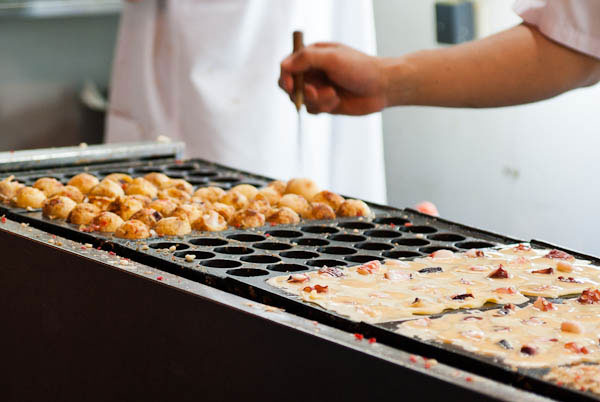 Takoyaki  Literally meaning grilled octopus, takoyaki is made by pouring a savory batter into a hemispherical iron mold along with a piece of octopus in the center. As the outside of the batter cooks, someone with very fast hands uses a skewer to rotate the takoyaki so it grills up in the shape of a sphere. While the dough is fully set on the outside, the inside is soft and gooey and the whole lot is doused in chunou sauce, a sweet and tangy sauce thats like a thicker, sweeter Worcestershire sauce. Its garnished with green nori flakes and shaved smoked bonito before being served with two toothpicks to eat while scorching hot. 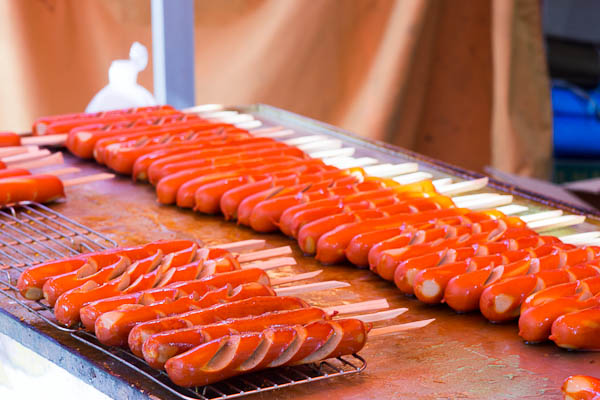 Furankufuruto– Japanese style frankfurters skewered on a stick and grilled. If you think hot dogs are mystery meat, these furankufuruto will put any Oscar Meyer to shame. Theyre an iridescent shade of orange, and after being grilled, the thin skin crisps up around a moist spongy center that reminds me a bit of matzo balls. After being doused in ketchup, hot sauce or fake cheese sauce, youll finish eating it long before you figure out what it is you just ate. 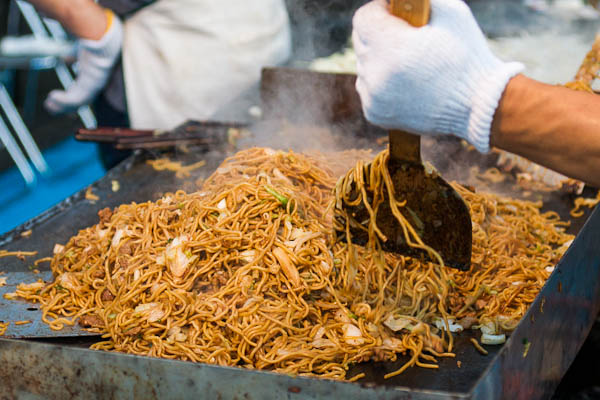 Yakisoba  While it may have soba in the name, this noodle dish doesnt actually use buckwheat noodles. Instead, yakisoba is made with Chinese style ramen noodles, which are fried on a griddle with vegetables and meat and seasoned with chunou sauce. 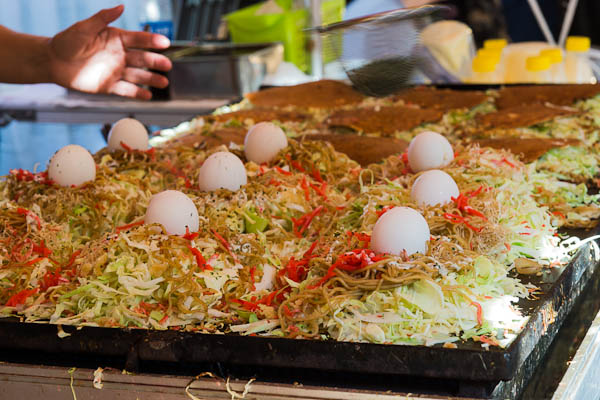 Okonomiyaki – Literally means grilled as you like it and is often described as a Japanese pizza. As the name implies you can put whatever you want into it, but it usually involves shredded cabbage, other vegetables and meat or seafood, held together with a thin batter. This is all topped with chunou sauce, green nori flakes, a few squirts of mayonnaise, shaved smoked bonito, and red pickled ginger. Some regional variations include a fried egg, or a layer of yakisoba folded between two layers of the pancake. 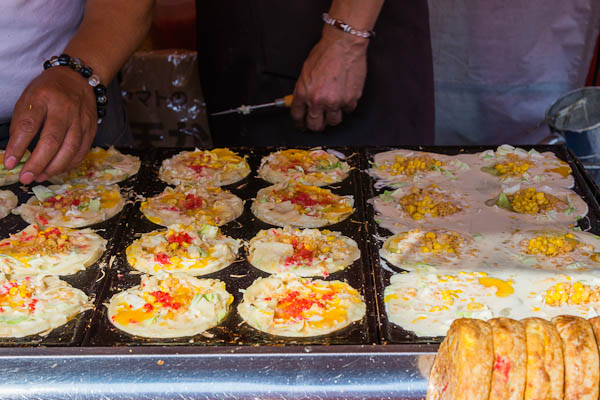 Oobanyaki  This is a specialty of the Kansai region of Japan but can be found almost anywhere theres a Matsuri going on. Oobanyaki is made by pouring batter into a round mold, and then filling it with an assortment of meat and vegetables. Sometimes, its filled with sweet bean paste, which turns it into a dessert. 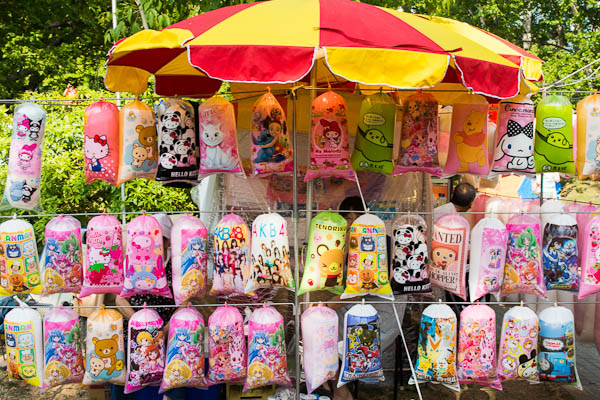 Wataame  Lest you think that Japanese people eat weird stuff at festivals, heres one thats shared in common with western fairs. Wataame or cotton candy is sold in colorful bags featuring pop culture icons, making them irresistible for kids (and the occasional grownup).