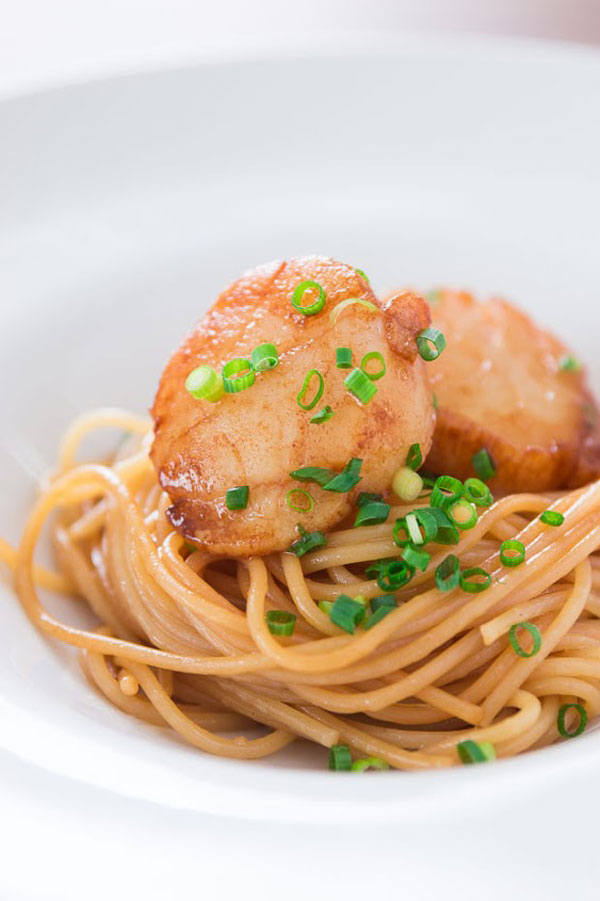 When it comes to my culinary ideology, one of my most valued beliefs is that food doesn’t have to be complicated to be good. Pasta is the perfect example of this tenet. Whether it’s Pasta Carbonara, Spaghetti with Meat Sauce or Pasta Primavera, these meals come together in less time than it would take have a pizza delivered, and at a fraction of the cost.

The inspiration for this dish came after some relatives I was staying with received a large quantity of giant live scallops from Hokkaido. When I say massive, I’m talking scallops the size of a tangerine. They were so big, I had to shuck them using a spatula instead of a scallop knife. While big isn’t always desirable, in the case of scallops it apparently is. These suckers had firm silky flesh and a briny sweetness that would have convinced me they were cured in sugar had I not shucked them myself.

Despite their standards lifting deliciousness, two nights of sashimi, carpaccio, and ceviche turned my initial enthusiasm into disinterest. That’s when I did the unthinkable and decided to cook them… in butter. But when I went to season them, I suddenly remembered I wasn’t at home. Without my drawer full of salts and seasonings at the ready, I had no choice but to hastily grab a bottle of soy sauce and pour some on before the abductor muscles shriveled up into dry pucks of disappointment. 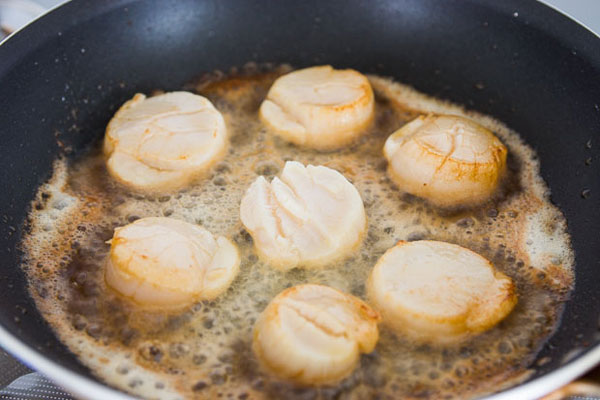 What happened next was magical. As the soy sauce hit the hot pan, it bubbled up furiously, pulling up all the browned flavors that the scallops had deposited on the pan and redistributing them onto the seared ivory mollusks as a rich mahogany glaze.

Sweet and succulent on the inside with an intense caramelized crust of umami on the outside, this was one of the best things I’d ever put in my mouth. My only regret was not being able to do anything with the flavor now glazing the bottom of the pan.

Fast forward a few months and I was once again faced with an overabundance of scallops; this time I knew exactly what I wanted to do with them. Pasta was the solution to my regret, with each strand of spaghetti soaking up the flavor in the pan, and taking on a glorious bronze hue. It also makes it a one dish meal that takes only a few seconds longer than the time it takes to boil the noodles (8 minutes for mine).

While you’re probably not going to find tangerine sized scallops from Hokkaido where you live, use the largest, freshest, dry scallops you can find. Dry doesn’t mean they lack moisture, it’s a name used to describe scallops that haven’t been treated with chemicals to make them retain extra water. Treated scallops tend to leave a slightly bitter aftertaste and border on mushy with a bland watered-down flavor. Dry scallops by contrast are sweet and brimming with umami, with a firm meaty texture. They can be a little hard to find in the US, and tend to cost significantly more, but they are well worth the cost and effort. 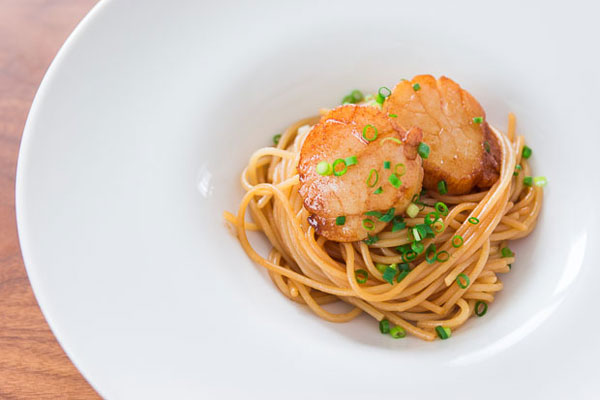 Food doesn't have to be complicated to be good! Food blogger Marc Matsumoto prepare this spaghetti with soy sauce butter scallops recipe for a simple pasta dinner on the Fresh Tastes blog.