One of Julia’s quotes says, I had a lack of confidence, which caused me to back down from forcefully stated positions; and I was overly emotional at the expense of careful, ‘scientific’ thought. I was thirty-seven years old and still discovering who I was. 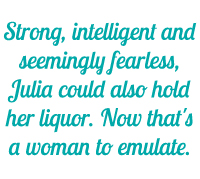 This sentiment, as well as many other “Julia-isms” gives me strength because I see myself in those words and know if Julia can do it, so can I. Julia Child was not only a culinary legend and pioneer in food television but a true female role model. Strong, intelligent and seemingly fearless, Julia could also hold her liquor. Now that’s a woman to emulate. 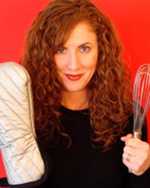 Average Betty videos and recipes create a positive environment for the exploration of all foods. From not-so-secret family recipes to the kitchens of James Beard Award winning chefs and all the morsels in between, Average Betty uncovers the treasures and chuckles that surround good food.

The Woman With All The Energy
Lobster and a Tribute to Julia Child
Learn More Providing Support for pbs.org