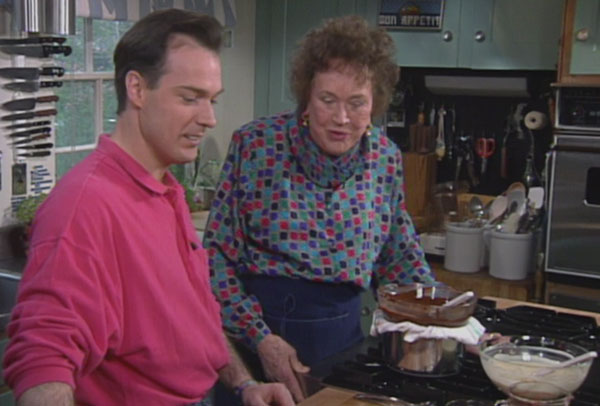 PBS Food asks Chef Jacques Torres about his time with Julia Child on the show, In Julias Kitchen with Master Chefs. In the midst of the Julia Child 100th Birthday Celebration, Torres pays tribute to her legacy.

Working with a legend like Julia was a huge highlight of my career. She was a master of her craft, and confident enough that she allowed me to show my skills and didn’t take credit for my work. She was one of the best hosts that I have ever worked with on television.

I discovered Julia when I arrived in the United States in 1988, and came to understand that she helped bring classic French cooking to main stream America. Her legacy is no doubt, to be the first American chef on television to cook classic French cuisine with a fun twist and burst of personality. She made complicated recipes feasible for the home chef.

What was the impact of appearing on In Julias Kitchen with Master Chefs?

Working and appearing on In Julia’s Kitchen with Master Chefs certainly gave me recognition among the American public, and built up my confidence for future television opportunities. I will always value the time that I spent with her, she was an incredible woman. I connected with her love for food and people.