Every Woman Should Have a Blow Torch | #CookForJulia | PBS Food

Food Home » #CookForJulia » Every Woman Should Have a Blow Torch

Every Woman Should Have a Blow Torch 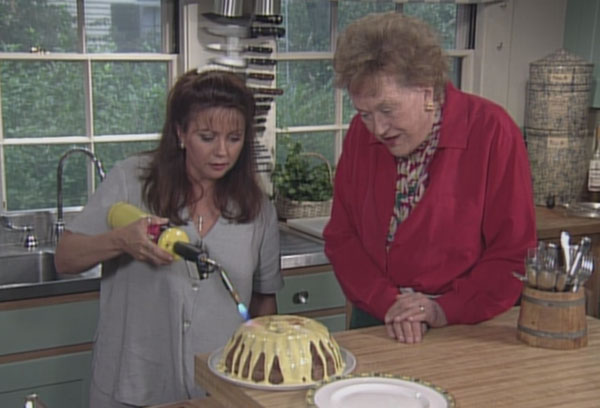 Why I Can Never Change My Phone Number: The first time I spoke with Julia is after I agreed to do her show (like I would have turned THAT down), Baking with Julia. I received a call from her producer at A la Carte Communications and asked for the best number to reach me. I gave them my Vegas cell phone number and about a week later Julia called me. She introduced herself and she told me how much she enjoyed my new cookbook, Spago Desserts, which I wrote with my good friend, Judy Gethers. What she found fascinating is that most of my cakes were Chiffon Cakes, which she hadnt seen in a while. She told me the history of Chiffon Cakes right then and there on the phone (had to do with butter rationing during World War II)! Then she said to me and I quote, Mary, regarding the taping of the show, I understand that you are, uh, are.. I knew right away she was concerned about camera angles as I had done lots of morning shows with very tall hosts. I quickly interjected and said Yes Julia, I am short! She asked me if I would be interested in either standing on a box or wearing high heels. I told her I would take the heels since I would probably fall off the box! So to this day, even though I live far away from Vegas, I still have the same phone number. I used to tell my students that it was like not washing your face after being kissed by Bobby Shermanhowever, now I have to say George Clooney because most people just look at me as if to say who is Bobby Sherman?

Report to 103 Irving Street at 6AM Sharp: I was up at 4 and was in the cab by 5:30. I saw the mailbox first, Paul Child, still written in block letters. I was already choked up. As I walked up to the house, the door opened and there stood Julia (Martha Stewart was behind her looking out over her shoulder). She greeted me with a big smile, warm hug and welcomed me into her home. Wow! She was in full make-up, hair perfect, smelled great and asked me if I wanted coffee. I felt like I was in my long lost home. My first day there, I was prepping desserts for my shows for the following day and Martha was taping her show that day. Martha had an entourage, I was solo. I really felt the need to have my crew for some reason! I prepped all day long in the downstairs kitchen and watched Julia and Martha on the monitors. It was July in Cambridge, hot and muggy, but I couldnt have been happier. That night, I was eating a Chicken Breast with Bernaise Sauce and broke a crown! It came out in many pieces, so there was no gluing it back in. I was devastated and told Julia. She said she would call her dentist and have it taken care of, but he was out of town and would meet me in his office on Saturday. I was taping my show on Friday! I can make pastries, I can talk while making pastries. I can do live or taped TV, make pastries, and talk; however, doing all of that with a gaping hole in my mouth was a challenge. Every time we had a little break in between taping, Julia told me that I sounded  just fine. I actually think she got a kick out of it, as in better you than me. By the way, the dentist was across the street from Fenway Park. I got a new crown put on, walked over to Fenway, looked up at the Green Monster, flirted with some of Bostons finest and went back to Cambridge.

The Blow Torch: During the taping of my Chocolate Bundt Cake with Crème Brulee and Chambord Raspberries, I finished off the dessert by caramelizing the sugar with a blow torch. As Julia was oohing and ahhing over the brulè cream cascading down the sides of the cake, she said Oh Mary, I think everyone should have a blow torch in the kitchen to which I replied No Julia, every WOMAN should have a blow-torch in the kitchen! I heard a few months later that she quoted that exchange in USA Today, much to my pleasure.

The Stool for the Vertically Challenged: When we were getting primped by the make-up artist in her kitchen, Julia was sitting on a stool, I was standing up. Then we were instructed to stand behind the kitchen island so the camera crew could get the lighting, the camera, etc. all figured out. We were looking into a monitor and saw the camera go from a 6 foot angle down to a 5 foot angle, and they couldnt get us in the same frame (even though I had my heels on). We just smiled at each other. Without a word, Julia reached over and very gracefully pulled the stool towards her and sat down. What class!

The 3rd Show Pre-Nap: Julia and I were scheduled to do two shows. After we finished taping the second one, the producer Geoff Drummond, came over the intercom and said Ladies, that was great, you are wonderful together, would you be willing to tape a third show? We looked at each other and said Sure. But Julia said I looked like I needed a nap. When Julia said I looked like I needed a nap, I took a nap! Of course, I couldnt sleep because I was so excited to be in her guest bedroom in the first place. After a few minutes of lying down, I heard a faint little knock on the door and Julia came in with the Boston Globe. She said that just in case I couldnt sleep, I might like to read. I felt like I was in Grandmas house.

Im Supposed to Act Like Im Teaching You??:Okay, that was the hard part about doing the show. I was (as were all of us who did the shows) supposed to pretend I was teaching Julia how to make Chiffon Cakes, Chocolate Mousse, Caramelized Walnuts, Crème Brulè?? Are you kidding? She was amazing. She asked great questions, she never acted like she already knew how to make anything that I made, and made me feel like it was the first time she had ever seen anything like it! I was so honored that my dessert, Walnut Mousse Roulade, ended up on the spine of Baking with Julia. So honored in fact, that when I wrote my second book (again with Judy Gethers), Spago Chocolate, I came up with a tribute to Julia, a Hazelnut Chocolate Roulade for Julia (Roulade au Chocolat Pour Julia)!

Julias Legacy: Pearls, Parmesan Goldfish Crackers and Passion. Pearls because she always wore them. I ran a series of cooking classes recently and took my favorite recipes out of her book, The Art of French Cooking, and requested that the students wear pearls to class, most complied. Okay, a few of the guys didnt have pearls, so they were let off the hook. Parmesan Goldfish because when I was at her house, there were bowls of Pepperidge Farm Goldfish all over the place. I also went to a memorial at a college in Boston just after she passed away, and they had goldfish crackers in honor of Julia. And finally, passion. Julia was passionate about everything, not just food. You could see it in her eyes. She was like an excited child going to Disneyland for the first time. Her enthusiasm was infectious. She was so passionate about teaching the world how to cook better food. I know that when I returned to Las Vegas after working with her that summer that I had changed. I had a new outlook on everything I did. To this day, whenever Im just a little too tired to get up and get ready for my students, I remember her standing at the doorway on Irving Street all ready to go with a great smile on her face, I too smile and embrace the day. My new favorite saying when things dont always go right in the kitchen What would Julia do?

Mary Bergin worked for Wolfgang Puck and Barbara Lazaroff in 1982 at the original Spago Restaurant in West Hollywood, California. Mary was a frequent guest chef on Julia Childs Baking with Julia and a contributor to the cookbook, Baking with Julia. Mary has written two cookbooks with her long-time friend, Judy Gethers, Spago Desserts and Spago Chocolate. Most recently, Mary ran the culinary program at Sur La Table in Santa Rosa.