Happy Birthday From The White House 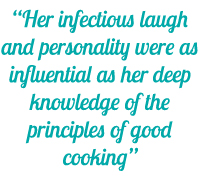 Julia Child inspired many chefs in her long career, myself included. And her infectious laugh and personality were as influential as her deep knowledge of the principles of good cooking. She minced onions but no words when it came to those who took kitchen shortcuts or who didnt fully acquire cooking skills. The best party I ever attended was organized by the ebullient chef Michel Richard in celebration of Julia Childs 80th birthday in February 1993 in Marina del Rey in California. She had actually turned 80 the year before but no matter, any excuse for a good “fête.”

All the best chefs of France and America came together to cook a wonderful dinner for 500 guests in tribute to her reign as the queen of cuisine. Roger Vergé, Paul Bocuse, Daniel Boulud, and David Bouley were all there, evidence of her influence in France as well as the United States. The chefs knew that she had expanded the audience for fine dining to a huge new segment of the American population. She was customarily unflustered by the attention, and wanted everyone to know that because she had been eating well prepared food she had lived to 80 and intended to live a lot longer. She did, and was active until the age of 92. For those cooks who ignored the lessons of classic gastronomy she had no patience. Kiddy food! she called it. “Grilled. Half of it is burned, half of it is raw.” She spoke that night of a perfectionist spirit, though she knew there was no such thing as perfection , and said she loved a lusty, full flavored dish over a pretty, but tasteless one, and she said; “Everything in moderation… including moderation.”

Her memory lives on in everyone she inspired to love good food. Merci, Julia 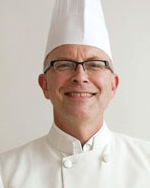 Bill Yosses is the Executive Pastry Chef at the White House. Trained in classical French cooking and a chef for over 30 years, Mr. Yosses brings a wide variety of experience to the White House pastry kitchen. He served as a White House Holiday Pastry Chef for the 2006 holiday season. His most recent project has been to assist in the opening of Paul Newman’s Dressing Room in Westport, Connecticut-a restaurant utilizing locally grown, artisanal and organic food sources. Other Executive Pastry Chef experience includes Josephs Citarella in New York City; planning, designing and opening the pastry department of Bouley Restaurant and Bakery and operating the pastry department of the Tavern on the Green Restaurant in New York City. Mr. Yosses was also Pastry Chef at Montrachet Restaurant in New York City. Photo by Marcus Nilsson

She Put French Food Within Your Reach
Mastering the Art of Living
Learn More Providing Support for pbs.org