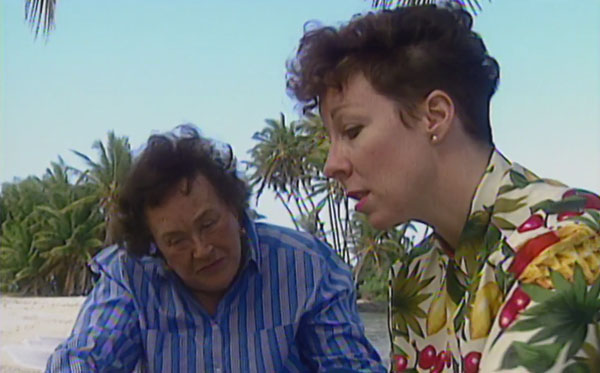 PBS Food asks Chef Amy Ferguson about her time with Julia Child on the show, “Cooking with Master Chefs.” In the midst of the Julia Child 100th Birthday Celebration, Ferguson pays tribute to her legacy.

It was always fun working with Julia. She was a master at making people feel right at home when on camera with her. Her sense of humor and intellect never missed a beat to ease any tension on the set…not that there was ever much.

In my life and career: I watched her early shows as a kid. Her whimsical manner made me feel that I could master the techniques to become a chef as did she. Soon after, I went to France to study.

Julia brought French cuisine and technique into our homes opening up the world of cooking to each of us we would not have gotten otherwise. The books she wrote gave good instruction and clarity to a cuisine most of us in America at that time had not witnessed. She opened our minds, helped us develop taste buds we never knew we had, and showed failing forward in the kitchen was simply excelling to the next level of cooking. Trial and error was our only teacher…just try it see if it works…whether that was her message or not…She would want you to keep going, just try it…it can always be fixed (most of the time).

What was the impact of appearing on “Cooking with Master Chefs?”

I think it helped America take Hawaii more seriously as a food destination rather than a wasteland of teriyaki, MSG and frozen foods. Julia was curious. She was a great research chef. I believe I have followed in her footsteps when it comes to researching food… and of course my relationship with Julia and the other chefs that were featured as we did promos for the series and book…

I miss my dinners and lunches with her… whether I watched as she made fresh mayonnaise for the chicken salad she was making us in her home kitchen or we were jaunting around Boston / Santa Barbara for different courses in various restaurants (progression dinners).

Amy came to Hawaii from Texas in 1985, as the first Food & Beverage Director for the Kona Village Resort. In 1987, Amy returned to Dallas, Texas to open Baby Routh, a 200-seat Southwestern style restaurant with wood burning grills and rotisserie for chef Stephan Pyles. Upon returning to Hawaii, Amy became executive chef at Rosewood’s premier five star resort, Hotel Hana-Maui, where she helped in the rearing of Hawaii Regional Cuisine. Appearing regularly on network television, she has also been featured in dozens of cookbooks. Chef Amy Ferguson is featured in Julia Child’s “Cooking with Master Chefs” series and is a James Beard award nominee.