I Can’t Imagine the World Without Her Influence 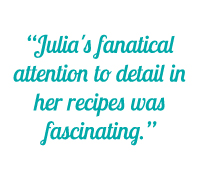 When I first started cooking, in Louisville, KY in the 1970s, I didn’t have access to a lot of cookbooks. But my mom did have Mastering the Art on her shelf, and I read it cover to cover and made her crepes, mayonnaise and many other simple dishes. Julia’s fanatical attention to detail in her recipes was fascinating. It wasn’t always easy to sort out which of the fine points were crucial and which were just niceties, but she taught me to scrutinize every aspect and not be satisfied with “adequate” food – an impact that I still feel, 30 years later. I can’t imagine how different the food world would be today without her influence. 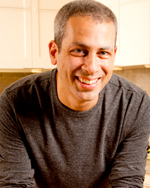 Michael Natkin is the author of the immensely popular and award-winning vegetarian blog www.Herbivoracious.com. For several years, as the author of the bi-weekly column Serious Meatless on the Serious Eats website, he was known among foodies, vegetarians, and fellow-bloggers for a cutting-edge, light and healthy, beautiful-on-the-plate style of vegetarian cooking. He is one of only nine members on the Chefs and Experts panel of AOLs Kitchen Daily and is a charter member of the Gourmet Live Socialvores. His blog and his recipes have been mentioned nearly a dozen times in the New York Times Diners Journal and he has been listed for four consecutive years on Saveurs Sites We Love. Hes known in the blogging community as a crack photographer, and his photos are regularly featured on TasteSpotting, FoodGawker, and other sites. He lives in Seattle with his wife and two daughters.