Food Home » #CookForJulia » It All Started With the Soufflé

It All Started With the Soufflé

In a little corner of a kitchen in Dallas, Texas, floated the familiar voice of Julia Child over the hum of an old TV. Thats where I rushed to everyday after school beginning when I was a child. I glued my face to the TV watching fervently and learning more than I ever did in school.

I thought I had finally found a class I could make As in when I signed up for home economics only to be disappointed when the only recipe on the syllabus was a boiled potato, carrot, and onion dish. I came home that day disappointed and thoroughly let down. But in an instant, I was inspired with the sound of Julias voice and how she made everything look achievable. I remember that day clearly, as it was the cheese soufflé episode. 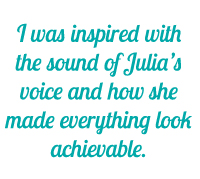 With childish excitement, I quickly got to work beating egg whites in my parents kitchen while listening to Julias instructions. When it came time to fold in the cheese I was horrified that we didnt have a single ounce of cheese in the house! As any ten-year-old would do, I found the cocoa powder as a replacement. I remember how my mouth was watering at the idea of how this is going to taste and the pride I would surely see on my parents faces. Unfortunately, my hopes were crushed when Julia put the soufflé in the oven because at ten-years-old I was not allowed to use an oven. Not wanting to give up I asked myself What would Julia do? She would most certainly use the microwave I thought and that I did.

Twenty minutes later, I had the chewiest, most burnt around the edges, pitifully fallen soufflé on the planet. I still remember the look of horror on my fathers face when he walked into the kitchen that day. I started to cry saying that I just wanted to be like Julia Child. It was then that he picked up the bowl, dumped the rock hard soufflé out on the counter, cut himself a piece, and ate it. To my amazement, he ate the entire thing! He said it was the best soufflé he had ever had; and of course my father never lied, so I knew I had done it.

I know now that was probably not the best chocolate soufflé he ever had. However, I walked away that day knowing that I could do anything if I just tried–and Julia did that for me. I still get inspired when I watch the French Chef and jump immediately into the kitchen. Julia Child was an amazing woman and chef and I thank her every time Im in the kitchen for teaching me to be fearless, to keep learning, to have fun, and above all for inspiring me from the start. 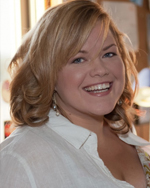 A graphic designer turned stay-at-home mom after her daughter was born prematurley, Meredith Steele focused her love for cooking to create InSockMonkeySlippers.com, a blog packed with family-friendly recipes and lighthearted stories about motherhood. Her fresh whole food recipes have been featured in many print and on-line publications.

The Journey Was as Significant as the Destination
Absolutely Fearless in the Kitchen
Learn More Providing Support for pbs.org