Eat Your Food, Know Your Food 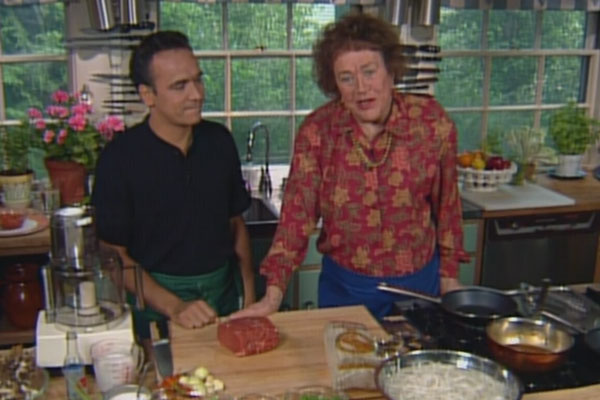 PBS Food asks Chef Jean-Georges Vongerichten about his time with Julia Child on the show, In Julias Kitchen with Master Chefs. In the midst of the Julia Child 100th Birthday Celebration, Vongerichten pays tribute to her legacy.

The first time I met Julia Child I was in 1985 while working in Boston at the Lafayette Hotel. She hosted a party at her home which I was invited to attend. I remember the way she pronounced my first name with a deep tone in her voice and I never expected her to be as tall as she was. She had the most impressive home kitchen was incredibly hospitable. A few months later, she came in for dinner. I was so nervous to cook for her. I will never forget her telling me that my food was great but a little flat and that it needed to be perked up. She told me in order to know your own food you must eat it yourself.

Years later I was invited to on her show, In Julias Kitchen with Master Chefs, one of my first TV appearances in America. We had a great time cooking together. At one point during the shoot, I used my bare hands to handle the food and she slapped my hand in the middle and yelled CUT, Jean-Georges (in her deep tone) NEVER touch the food with your bare hands on TV. Lets do it again!

I believe that Julia Child paved the road for the industry. She was a great chef, TV personality and among all a wonderful woman.

What was the impact of appearing on In Julias Kitchen with Master Chefs?

Appearing on Julias show helped me build my reputation as a chef and was great for business. People recognized me by being on the show and would stop me and say, I saw you cook with Julia.

Jean-Georges Vongerichten is responsible for the operation and success of a constellation of three- and four-star restaurants in the United States, United Kingdom, Shanghai and Hong Kong. In October 2012, he releases Asian Flavors of Jean-Georges, featuring recipes from his restaurants Spice Market, Vong and 66.