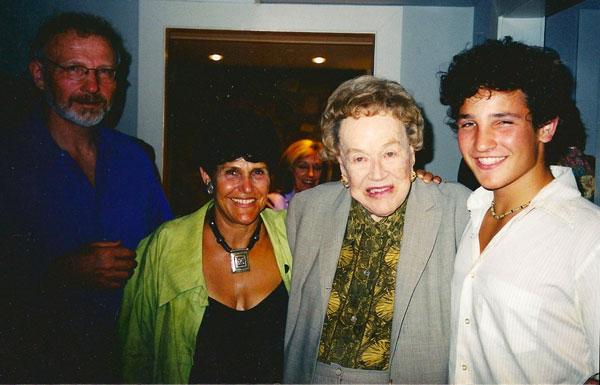 I first met Julia in the mid 70s when my husband Allan and I were living in Cambridge. At the time I was studying at Harvard’s Kennedy School of Government. When the Mexican cookbook writer, Diana Kennedy, came to Boston, she asked me to take her to an appearance on ABC. Starstruck, I picked her up at Julia’s where she was staying. Julia could not have been more gracious and gave me an autographed copy of her French Chef. For the last thirty years of her life we were friends: she showed up at a tour of Jewish Philadelphia [a walking tour] I was giving for the IACP, we went out for many meals together, she appeared on my own PBS TV series Jewish Cooking in America and filmed a few episodes of her show (Cooking with Master Chefs) at my house, and most of all, we spent many hours on the phone gossiping, something she dearly loved.

For Julia’s 90th birthday and the opening of her kitchen at the Smithsonian American History Museum, I threw a small dinner party for her. It was mid summer and I cooked the meal with my son David, who at the time was about 16. We decided that for this meal for 30 we would make simple American food. David took some fresh figs and squash blossoms and filled them with goat cheese as an hors d’oeuvre. I made my health bread, with mixed heirloom tomatoes and lots of basil, salmon with preserved lemon and za’atar, and corn with pesto. The dessert was an apricot cobbler with lots of ice cream as well as Ann Amernick’s chocolate cake decorated with all of the covers of Julia’s books. Julia taught me the art of simplicity and just being oneself, lessons that have guided me through many subsequent dinner parties!

Joan Nathan was the host of “Jewish Cooking in America with Joan Nathan” on PBS, and she is the author of is the author of ten cookbooks including her most recent, “Quiches, Kugels, and Couscous.” She is a regular contributor to The New York Times, Food Arts Magazine, and Tablet Magazine, among other publications. You can learn more about Joan on her personal website for a listing of her upcoming appearances and more.