Julia taught us to allow ourselves to be inspired. She made cooking accessible and approachable while paying homage to French traditions in a way that was void of mystique. The perfect balance of confidence and humility allowed her to teach us all and to set the benchmark for what would later become America’s fascination with cooking and television. Since watching my first episode of her show, I have been inspired to cook with passion and heart, knowing that we’re never too old to learn new things. 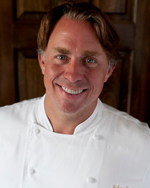 John Besh is a chef and a native son dedicated to the culinary riches of southern Louisiana. His flagship restaurant, August, is a Gayot Top 40 Restaurant and a Wine Enthusiast Top 100 Restaurant.Beshs two cookbooks, My New Orleans (October 2009) and My Family Table in (November 2011) were each recognized with an IACP Award. He hosts two national public television cooking shows based on the books, Chef John Beshs New Orleans, and Chef John Beshs Family Table, which will debut in April 2013.

Lisa Lillien: A Few Words for Julia Child
What Does Your Favorite Chef Think of Julia Child?
Learn More Providing Support for pbs.org