In this video, Made in Spain host Jose Andres talks about the first time he watched Julia Child on PBS. 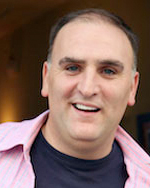 José Andrés is a native of Spain and chef/owner of ThinkFoodGroup, the team responsible for Washingtons popular and award-winning dining concepts Jaleo, Zaytinya, Oyamel, and the critically-acclaimed minibar by josé andrés, as well as Los Angeles exciting destination, The Bazaar by José Andrés, part of the SLS Hotel at Beverly Hills. ThinkFoodGroup oversees all of Josés creative endeavors such as cookbooks, television programming, concept consulting and project development.