Lobster and a Tribute to Julia Child | #CookForJulia | PBS Food

Food Home » #CookForJulia » Lobster and a Tribute to Julia Child

Lobster and a Tribute to Julia Child

This post is reprinted with permission from Food Fix Kitchen 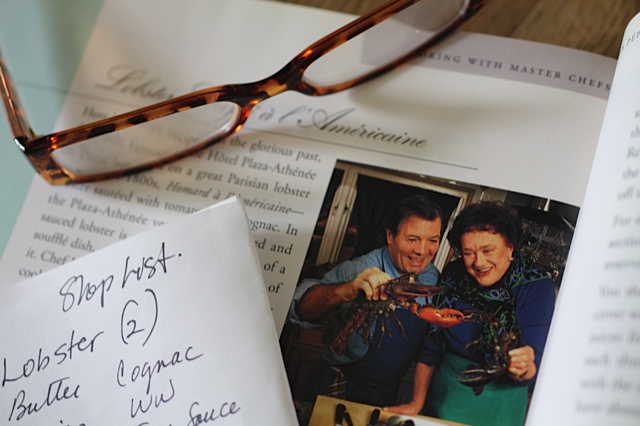 I’m not going to lie. This recipe will take a while. From start to finish, probably three hours. Not including shopping, because this is not one of those “fly by the seat of your pantry” recipes about which I brag that you “probably have everything you need for this already!” It’s JULIA. With JACQUES. It’s lobster. PBS.org is doing a summer long tribute to this doyen of home cooking, this translator of the time-honored French technique for the American audience, in honor of her 100th birthday on August 15th. This recipe and post is my slice of that pie, or should I say soufflé. 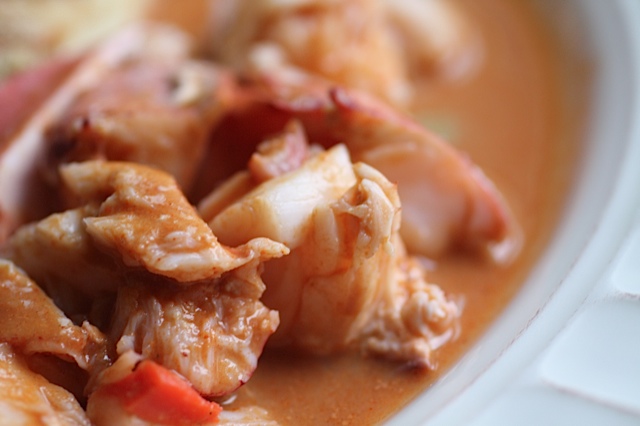 When I got the request to do a post on Julia, I had to search my culinary soul for a connection to her. Yes, she’d been on PBS since the early 60s, when I was more focused on cartoons and situation comedies than cooking, and through the 70s and 80s when working in restaurants or doing private catering was what I did to pay the rent while pursuing other more glamourous dreams. Julia was always there, an American icon of TV cooking, a tireless promoter of a wider, more global palate. Even if you never watched her show, you knew her. You recognized the voice from the other room, if you had the TV tuned into the morning shows as background while you got ready for work. She’d done dozens of such appearances. You could appreciate the sincerest flattery when impressionists took on her modulating mad vocals, and belly laugh at the Saturday Night Live version of her antics with a chicken. Like a lot of the country, I have the best seller and subsequent film, Julia and Julia to thank for pulling my attention to her as a real person, a fearless and focused pioneer of what we take for granted now: culinary instruction as entertainment. She ushered in the era of the serious home cook. It was her worship at the alter of fine food, her awe-struck admiration of great restaurant chefs that helped create the era celebrity chefs as well. From Jacques Pepin to Tom Collichio, and all the TV chefs in between, each have Julia Child to thank in some way for their very public good fortune. 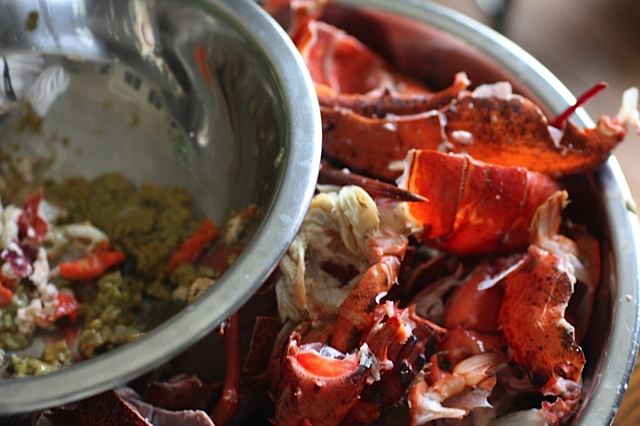 Yet, as I dug into Julia, I realized that it was more personal than that. She was not just the world’s cooking pioneer. What she’d done mirrored some of what I had the opportunity to do nearly 60 years later, though on a much more modest scale. She went to culinary school as a late bloomer, an oddball 36-year-old attending Le Cordon Bleu in Paris. I went to the French Culinary Institute in NYC at age 51 in 2009, where I was in a class of 20 students, most of whom were half my age. After Cordon Bleu, Julia teamed up with two like-minded classmates and started a cooking school. By the time I graduated from FCI, I had my logo, business cards and a plan to start my own “mobile” cooking school, FoodFix. Now, I’m booked months in advance for in-home culinary instruction, cooking parties, corporate cooking demos and team building through cooking. Julia slogged away at writing, a vision for a book that would hand the home cook, on a silver platter, the inspiration and technique they need to enter the glorious world of French cooking. It was nearly 800 pages long and took a total of 10 years to complete and then find a home with a publisher. For 2 years I’ve been writing this blog, dozens of freelance articles and guest posts, chipping away at my own idea for a cookbook, all while hoping that my voice and POV will make a dent in the culinary world, and inspire people to get in the kitchen and eat well, cook well, live well. Nearly 50, Julia broke into TV cooking, hell, she basically invented the genre that made it possible for me, at nearly 55 to appear on a morning show, and a cooking competition show on a network dedicated 24/7 to Food. My private and public dreams of gaining CHEF CRED and some modest place in the public radar are possible in part because of the path she brûléed so many years ago. 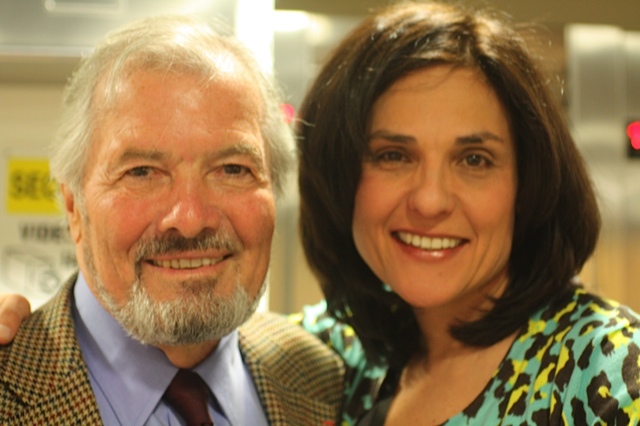 Which brings me to another point of intersection between my life and Julia’s, and the reason why I chose a recipe from her book, Cooking With Masters, a companion to her TV series Master Chefs. In this 1993 book, Child showcases 15 established chefs, each offering 3-4 signature recipes that she sort of adapts for the home cook. (I say “sort of” because, 3 hours is hardly what most home cooks would tolerate in 2012 for any recipe…but maybe in 1993 people had more time? They probably did because there was no internet.) At FCI I got to see Chef Pepin occasionally in the kitchens, and in the halls, and whenever he was doing a demo for students in the school’s amphitheater I would volunteer to assist him. I was lucky enough to get to do this several times, as well as with the other Deans of the school, Chef Alain Sailhac (Le Cirque, 21) and Chef Andre Soltner (Lutece), who is also feature in the book. I too was awe-struck by these master chefs. I loved being around them, listening to their lyrical French accents which brought me back to my childhood with family gathered around food-laden tables, bantering in French, Enrico Macias or Edith Piaf playing on the stereo. 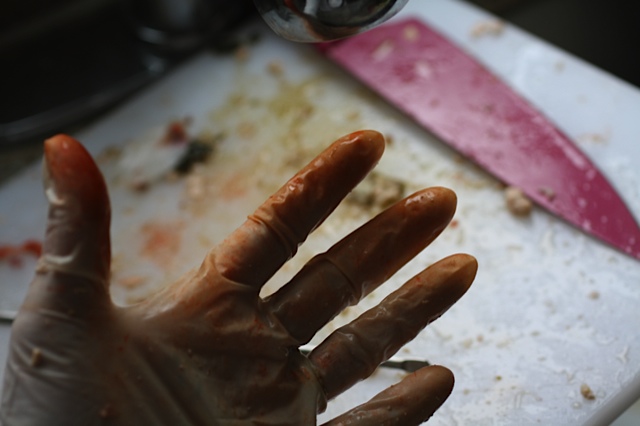 I had so much fun with this recipe. I dedicated most of a day to it, starting with choosing the lobsters from the tank at my local fish monger, to the final flourish of the tomalley-infused butter on the plate. Those three hours (ok maybe four) going from task to task, building the flavors from the ground up, paying attention to the classic technique, taking time with the small details that make a big difference, I was in focus and in the present each step of the way. I was in my life in the vivid and hands-on-the-wheel way that only cooking gives me. With a knife in one hand and a sweet lobster in the other, there is no dwelling on the past or longing for some imagined future. As for the time it all took, well I’ll quote Julia here and leave it at that: “…nothing is too much trouble if it turns out the way it should. ? Julia Child, My Life in France

Get the Full Recipe 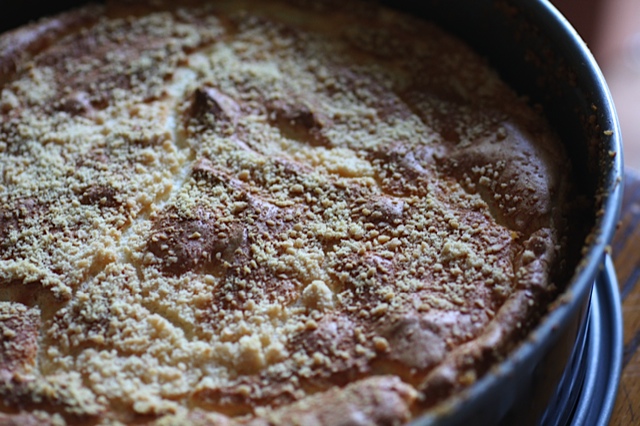 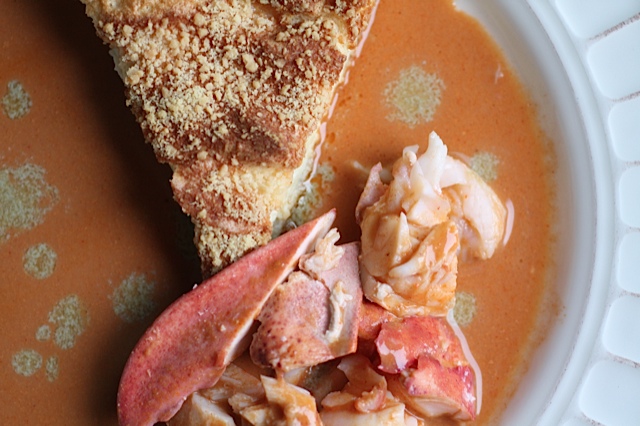 Get the Full Recipe 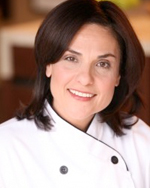 Getting a Food Fix with The Kitchenista, Rachel Willen, is an experience that will bring the magic of cooking great food into your life. Trained at the French Culinary Institute in New York and with over 30 years of professional and home cooking experience, Chef Rachel has much to share with you. You will eat better, cook better and live better as a result, and youll have a blast doing it. Rachel says, My style is all about laughter and creativity and being at ease in the kitchen. When you cook you have to focus on the here and now, tune into your instincts and senses and everything else you have to worry about goes on the back burner (pun intended!)

A True Female Role Model
One of the Great Pioneers
Learn More Providing Support for pbs.org