Mary Ann Esposito: Julia Child Was Queen of the Kitchen

Julia Child would have been 100 years old on August 15. She was born in 1912 and I always remember her birthday because mine is in August too and that was a reminder for me to send her a birthday card. She was such a lady that she would send me a return typed postcard thanking me for remembering her birthday.

One year when I was still in production for Ciao Italia, Julia was passing through New Hampshire on her way back from her vacation spot in Maine. We invited her to stop by the studio and film a little cooking segment on frittata. She happily agreed!

It is no secret that Julia thought that Italian cooking was not a serious cuisine. It had so structure, no rules and no unification. On the other hand, French cuisine was regimented, organized and had standards.

She was the queen of the kitchen and even though I did not agree at all with her, I was thrilled to have her in my kitchen! 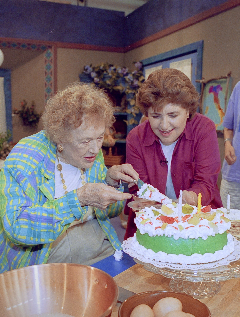 So Julia, a towering and unassuming person with a mesmerizing voice settled into the TV surroundings and was ready to cook. The plan was for her to do the commentary as I whipped up the eggs for the frittata. We moved along nicely during the taping and compared how the frittata and her beloved omelet were made and how they differed in their preparation. As I gingerly whisked the eggs, I asked Julia if there was anything special she would have added to the eggs and without hesitation she suggested a little bourbon! That took me quite by surprise and elicited a deep belly laugh from me. After the taping we surprised her with an elaborate Sicilian Cassata cake filled with pistachio cream and ribboned in pistachio fondant. We sang happy birthday in Italian; Julia blew out the candles and a round of photos was taken.

If she were still with us today, I would gladly make that frittata all over again, adding the bourbon as she suggested. She will always be the queen of the kitchen. 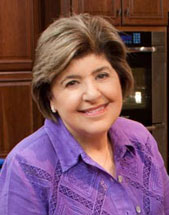 As the creator and host of the nationally televised PBS series, Ciao Italia with Mary Ann Esposito, Mary Ann has brought those values to millions of Americans. This year, the series celebrates its milestone 21st season, making it the longest running cooking series in television history.

The Introduction to a Lifetime of Cooking
Hooked on Julia Child After One Bite
Learn More Providing Support for pbs.org