The most endearing thing about Julia Child was her unapologetically human style. Even though she used to tackle French cuisine, she did so in a way that drew in viewers, fans and chefs alike. Her simple but determined approach, coupled with her warm sense of humor impacted the culinary world in a way that no one had ever done before. Here is somebody who was not a chef of haute cuisine, but an American who was just genuinely interested in good French food.

I think Julia would admit that she wasn’t the most graceful of persons and certainly did not fit the typical stereotype of a French cook. However, that didn’t keep her from influencing an entire industry and becoming one of the world authorities on food. She proved that anyone who wants to prepare good food can do it. It doesn’t take intense educational exercise.

Don’t forget, Julia became successful in demonstrating the joys of cooking during a time when it was becoming more important to be able to push a button and have dinner ready instantly. Julia showed that the act of cooking is one of the warmest activities one can engage in to bring someone or a community together.

It is Julia’s indelible influence that made me relevant as a professional chef, and I will never ever forget that. 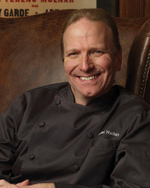 Chef Michel Nischan was the resident chef on The Victory Garden. He wears many hats, from dynamic restaurant owner, award-winning cookbook author, and media personality to food policy advocate and non-profit foundation CEO of Wholesome Wave. Growing up on a farm instilled in Michel Nischan a deep appreciation for sustainable agriculture and those who work the land. Today, in addition to his role as chef and owner of Dressing RoomA Homegrown Restaurant, located on the grounds of the Westport Country Playhouse in Connecticut, Michel starred as The Victory Garden’s resident chef.