The first time I met Julia was at her house where she and Jacques (Pepin) were shooting their cooking show. The theme of the episode was sandwiches. Jacques was holding a baguette and chocolate while Julia had an ice cream sandwich. 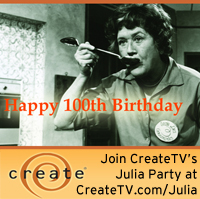 Jacques began by taking a bite out of the baguette and talked about his childhood in France eating crunchy bread and dark chocolate. Julia said that when she was a little tiny bitty kid growing up in Pasadena – there was immediate laughter since she was never a tiny girl – she loved eating an ice cream sandwich with chocolate and vanilla.

There was a cut. As the crew prepared to reshoot the opening, someone tried to grab the ice cream sandwich from Julia’s hand. She wouldn’t let them, finishing the sandwich. There were two more cuts after that and each time, Julia ate another sandwich.

When Jacques and Julia were done shooting, we went to Jody Adams’ Rialto in Harvard Square. After eating three whole ice cream sandwiches, Julia finished an eight course meal. She was already a hero in my book but her gusto for eating everything on her plate solidified my opinion of her.

One of Julia’s best qualities, and one of the things I respect the most about her, was how she thanked everyone she could for a great meal: the host, servers, busboys and any cooks she had access to. When Julia dined at Blue Ginger, she literally went to every single cook on the line, shook their hand thanked them for dinner. 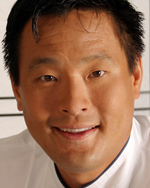 Ming Tsai is the host and executive producer of the public television show Simply Ming, distributed by American Public Television. In 2009, Simply Ming received two Emmy nominations for ‘Outstanding Culinary Program’ and ‘Outstanding Lifestyle/Culinary Host,’ and received two Bronze Telly Awards in the categories of ‘Lighting’ and ‘Art Direction.’ In 1998, Ming opened Blue Ginger in Wellesley, MA and immediately impressed diners from Boston and beyond with the restaurant’s innovative East-West cuisine.