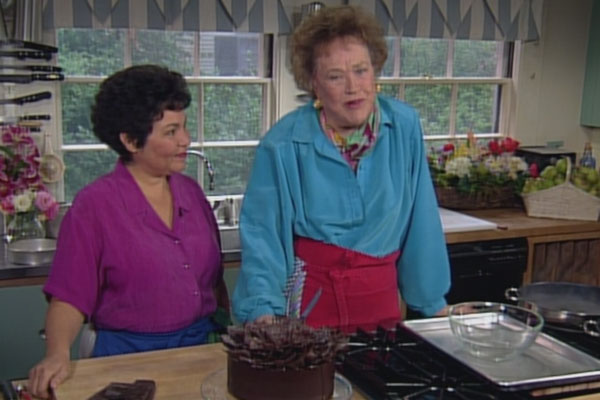 PBS Food asks Chef Alice Medrich about her time with Julia Child on the show, Baking with Julia. In the midst of the Julia Child 100th Birthday Celebration, Medrich pays tribute to her legacy.

Working with Julia was an extraordinary moment in my career. On and off camera, Julia was welcoming, generous, and respectful. She was a natural entertainer and consummate professional, but never a prima donna. It was clear that she wanted her guests to be the stars of the show. She stood aside and watched and asked good questions and fetched and carried for me as I worked and as we chatted. One thing I will never ever forget: regardless of how many helpers and staff we had on that set, Julia picked up a towel and started wiping the counter every time the cameras stopped rolling. That was Julia.

Julia showed us that cooking was as fun and joyful as it was challenging, that you could be serious about food without being formal or pretentious, that mistakes were fixable, that friends at the table were important, and that anyone could learn. She also showed everyone, but perhaps especially women, how a passion could become a profession.

What was the impact of appearing on “Baking with Julia?”

My appearance on Baking with Julia surely introduced millions of people to me for the first time. And surely more people bought my books and came to my shop. But I mostly remember how honored I felt to be recognized for my contribution, and how impressed and inspired I was by Julias generosity to those of us coming up after her. By sharing her stage, she set a lasting example. Meanwhile, those old episodes continue to air and I still love to hear people say I just saw you on Baking with Julia!

Alice Medrich received her formal training at Ecole Lenôtre in France and is widely credited with introducing the chocolate truffle to the United States when she began selling them at her shop, Cocolat. Medrich currently devotes much of her time to teaching. In 2012, she released a new cookbook, Sinfully Easy Delicious Desserts, and a new interactive online class, Decadent Chocolate Cakes.