Never Say No To Julia Child 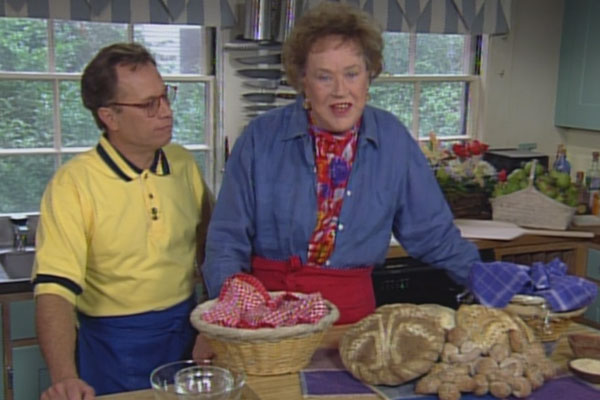 PBS Food asks Chef Joe Ortiz, author of The Village Baker, about his time with Julia Child on the show, “Baking with Julia.” In the midst of the Julia Child 100th Birthday Celebration, Ortiz pays tribute to her legacy.

My first impression of working with Julia was that she was so incredibly worthy of all the acclaim bestowed on her because she was such a people person and so interested in what any of us (as chefs and bakers) were doing. Anyone lucky enough to meet and work with her truly felt appreciated in her eyes.

Julia was first known for the Mastering the Art masterpiece, but it belied her later accomplishment of being able to inspire people simply to get into the kitchen and cook. She helped revived cooking as a lost domestic craft, as a humble connection to our experience of living the full life.

What was the impact of appearing on Baking with Julia?

I had hundreds of people come up to me for the next 5 years saying that theyd seen me on Julia. And to a person they all had this warm adoration for her. It was a pleasure to let them know that she was every bit as charming in person as she was on TV.

Julia called me personally when I was on vacation a few months before our shoot for Baking with Julia. I was in Scotland and the first thing she asked was, Are you fishing for salmon?

She was calling to ask me to teach people about sourdough on her show. At first I was reluctant to attempt such a challenging process on TV and to transport starters across the country on an airplane, but quickly realized that youre a fool if you say No to Julia.

Joe Ortizs first book, The Village Baker, was nominated for the Julia Child cookbook award and he co-authored three other books. Joe songss have been featured in his self-produced stage production, Bread!  The Musical and in his 2010 show, Smoke Cabaret. Joes current theatrical production, Escaping Queens, is set to have its World Premiere in Aptos, California in August 2012.