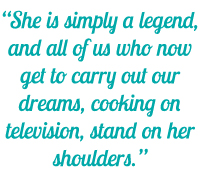 My first food television experience, like for many, was with Julia. I remember being a little boy and watching her on a small black & white TV my grandmother had. I would sit there and eat fork crushed potatoes with butter (my grandma Hazel was Irish / English) while Julia was, you know, making coq au vin and using the innards for the sauce or something.

I also remember watching so much parody of her work. Monty Python, SNL, I think we grew up with that, and it’s such a compliment to her icon.

Then one day when I was just starting at Restaurant Daniel in New York City, working in the downstairs kitchen, and turning apples, or something ridiculously French like that, one of the chefs called down for some mise en place. As I raced upstairs and turned the corner, there was Julia Child. I was frozen… There are many super stars that pass through such kitchens as Daniel, but this was, just mind blowing to me. It was like a little league baseball player running into Babe Ruth in Yankee Stadium. She is simply a legend, and all of us who now get to carry out our dreams, cooking on television, stand on her shoulders…

Perhaps most recognizable as the winner of Bravos Top Chef All-Stars, Richard Blais is a successful chef, restaurateur, cookbook author and television personality. After graduating from the Culinary Institute of America, Blais went on to train at French Laundry, Daniel, Chez Panisse, and el Bulli. He currently owns and operates Trail Blais, a forward-thinking culinary company that has consulted on, designed, and operated some of Atlantas most popular eateries including multiple outposts of Flip Burger Boutique, HD1 and most recently, The Spence. Blais currently resides in Atlanta with his wife Jazmin and their two daughters Riley and Embry. When not behind the stove, Blais may be found training for his next marathon or cheering on his favorite European soccer team.