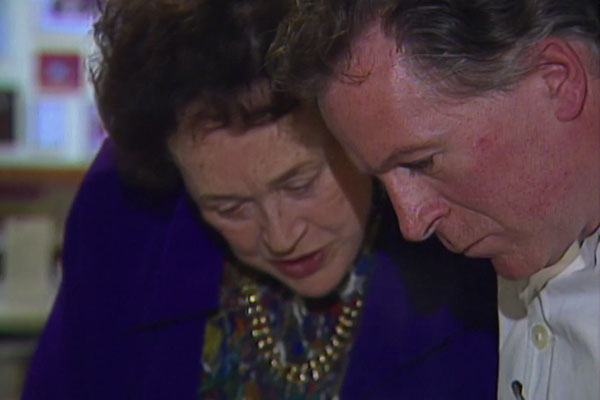 PBS Food asks Chef Jeremiah Tower, cookbook author and wine and food consultant, about his time with Julia Child on the show, “Cooking with Master Chefs.” In the midst of the Julia Child 100th Birthday Celebration, Tower pays tribute to her legacy.

I first met Julia Child at Savenars grocery in Cambridge (Mass) in 1967 where she saved me from a rapacious owner who was trying to bully me into thinking that the goose I had ordered, and sitting on the counter in front of us, was fresh and not frozen. I turned to Julia for her opinion. SEND IT BACK! she shrilled for all to hear. I did, and he did.

So working with her was quite similar  she in the command post and her troops around her. In the show that I did with Master Chefs we used my pastry chefs (Emily Luchetti) house in Sausalito. Julia was in one room out of sight of the kitchen, I was at the stoves and counter with my chicken. Every once in a while this shrill Patton-like command would tear through the house: WHAT ABOUT SALMONELLA?

Well I was not going to talk about that disease and its symptoms on TV so ignored her. 10 minutes later another shrill shout: SALMONELLA! SALMONELLA! Well, of course, the whole crew cracked up and it took a few glasses of champagne to get going again.

What do you believe is Julia Child’s lasting legacy?

I think she took the fear out of using your own kitchen to make wonderful food and dinner parties. The same way that The Joy of Cooking did for a couple of generations before. What I have heard over and over again is the education and the fun everyone had by cooking their way through both volumes of Mastering.

What was the impact of appearing on Cooking with Master Chefs?

Well, it was not like being on David Letterman or Lifestyles of the Rich and Famous. But the books sold forever, and any place we went for a benefit for the AIWF or whatever we were doing, I would get a lot more attention (and therefore press for my restaurants) because I was in the book. They were always there to be sold or signed.

Jeremiah Tower began his culinary career as co-owner and executive chef of Chez Panisse in Berkeley, California. Jeremiah has written several cookbooks, starting in 1980 as assistant and sometimes co-author with Richard Olney of the Time Life Books thirty volumes of The Good Cook. Jeremiah has lived and traveled most of the world, and has been involved in consulting and with wine and food promotions around the world.