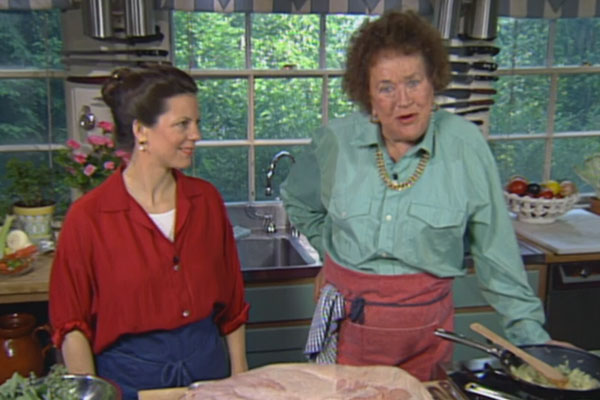 PBS Food asks Chef Jody Adams, of Rialto, about her time with Julia Child on the show, “In Julia’s Kitchen with Master Chefs.” In the midst of Julia Child’s 100th birthday, Adams pays tribute to her legacy.

I was nervous and instead of choosing something simple Id opted to prepare a stuffed veal breast. Even Julia was a bit taken aback. It is kind of large, dont you think? Youd never get away with it today–the breast had to be stuffed and braised, then sliced and grilled. I must have been crazy. But Julia was a great sport. We were in her kitchen, which I had worked in before, so it felt very comfortable and familiar. After a while it wasnt about TV–I was simply cooking with Julia. She offered a little critique from time to time, in the spirit of, How can we make this better? All very collaborative and friendly. She was a pro and wanted to make sure we did things right, but she also wanted to have a good time so it was really fun.

She democratized great food. For many Americans, Julia was a gateway to French cooking, but I think her greater legacy is the belief that simple food, cooked well, is delicious. She just happened to be using French food, which was great because at the time a lot of people thought French food was impossibly complex. She showed that much of French cuisine was less culinary rocket science than a set of techniques that anyone could learn–and you could have a great time doing it.

The appearance was huge for me. I had the sense that everyone in the country was watching us. TV was so powerful in the days before cable. Being invited to cook with her was also an endorsement by one of the most well respected cooks in America. It gave me a lot of confidence for future appearances in front of the camera. It was really cool.

A James Beard award-winner, the chef/owner of Rialto in Cambridge and the Chef and Co-Owner of Trade, Jody Adams has been praised for her creativity, support of local farmers, continuous charitable work, and business acumen by local and national publications from The Boston Globe and Boston Business Journal to Gourmet, Food & Wine and The New York Times. She was a recent contestant on the second season of Top Chef Masters, BRAVO TVs popular culinary competition. In Fall 2011 Jody and her husband launched a food blog called the Garum Factory.

Humor and Intellect
She Delivered the Message of What Cooking is About
Learn More Providing Support for pbs.org