Spike Mendelsohn: I Grew Up With Julia | #CookForJulia | PBS Food

Spike Mendelsohn: I Grew Up With Julia Child 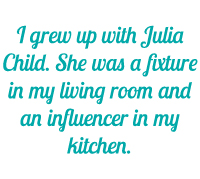 I grew up in a restaurant family. This unique upbringing placed me in the kitchen at a young age, but it also meant that my parents worked non-stop. As a kid I required constant supervision to stay out of trouble, so my mom would turn on PBS and watch with me. I grew up with Julia Child. She was a fixture in my living room and an influencer in my kitchen. My mom knows how to pick role models.

There was something special about watching Julias boisterous personality flood through my television and show me that cooking isnt just about work or staying nourished. Julia captured the fun of food and shunned the pretentiousness or perfectionism that sometimes finds its way into a kitchen. I loved Julia, along with her successes and blunders in front of the stove. Her effervescent approach to cooking was captivating! I was hooked. Im sure that I would have fallen in love with food regardless, it was inevitable in my family, but Julias lively programs on PBS surely got my stomach rumbling. 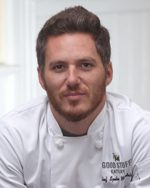 Chef Spike Mendelsohn is a graduate of The Culinary Institute Of America and worked for culinary icons such as Gerard Boyer in Reims, France; Thomas Keller of The French Laundry and Bouchon Bistro in Napa Valley, California; Sirio Maccioni of Le Cirque and Drew Nieporents Mai House in New York City. Spikes television debut was on Bravos hit television series Top Chef for their 4th season in Chicago. He also appeared on Bravos Top Chef All-Stars and the Food Networks The Next Iron Chef: Super Chefs.