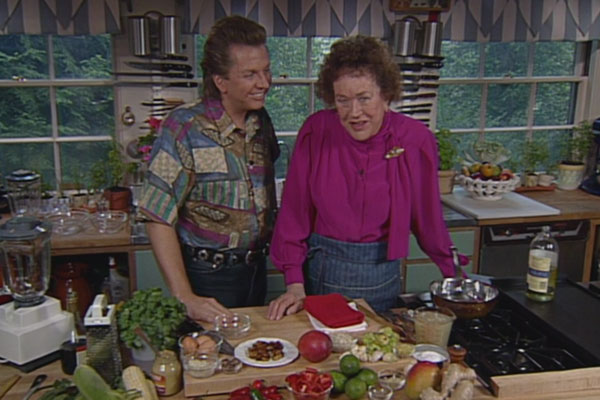 PBS Food asks Chef Dean Fearing, chef and partner of Fearing’s Restaurant, about his time with Julia Child on the show, “In Julia’s Kitchen with Master Chefs.” In the midst of the Julia Child 100th Birthday Celebration, Fearing pays tribute to her legacy.

For somebody I didnt think I would learn so much from, I really did learn a lot. The best thing I learned is everything in moderation and eat whole foods. I look back on our time together as some of the most inspiring times of my life, mainly when we were in deep discussion over a BBQ Sandwich and Pearl beer at Sonny Bryans in Dallas.

She really was a culinary leader. When you were with her, you were always in an aura of food discussions. We spent more time together just talking food and nothing else.

It was fantastic until one day I almost killed her. We were setting up the next scene for a show and she was noodling around looking at my ingredients when she stuck her finger in the Tabasco, tasted it and suddenly started choking. She couldnt catch her breath and everyone started running towards her including her producer, who jumped over the table. We sat her down in a chair and all I could think about was I have just killed the Grande Dame of Cuisine and will probably be banned from cooking. She suddenly caught her breath, looked at me and said Whoooo that was spicy!