The Introduction to a Lifetime of Cooking | #CookForJulia | PBS Food

Food Home » #CookForJulia » The Introduction to a Lifetime of Cooking

The Introduction to a Lifetime of Cooking

I was an unusual kid; at 9 years old, I had a fascination with food that went well beyond stuffing myself, like most kids, with breakfast cerealalthough I did that, too. I loved to stand by the side of my fatherthe great cook in our homeas he worked at the stove. Of course I was a huge fan of Julia Child; Sunday afternoons, Id sit rapt in front of the television set in my Northern California home, watching The French Chef. Julias show was a portal onto an adult world I had only a passing familiarity withso sophisticated, so . . . delicious.

My own attempts at cooking hadnt ranged beyond upending a box of Captain Crunch and pouring it into a bowl when, one fateful weekend, I turned on The French Chef to find Julia Child constructing a Caesar salad. She had pulled the recipe directly from the Caesar Cardini orginal, the one she had first tasted with her family in Tijuana in 1925, when she herself was only a child. It was the pièce de résistance of that episode, and I was transported by it. Lemon, anchovy, Romaine, Parmesan, coddled egg, Worchester sauce: It contained all the elements I could possibly want to make it my dream food. I scribbled the instructions she gave as she cooked onto a piece of paper, and I resolved to make that salad that very same day.

What an incredible joy my Caesar turned out to be, the way the high notes of the lemon and Parmesan and Worchester melded with the depth of anchovy and the creamy coddled egg, how the edgy texture of those perfect inner leaves of Romaine lettuce contrasted with the olive oilfried bite of the croutons. The exaltation that I got at that sense of control and gratification, the smiles on the faces of my family memberswhat a perfect first adult food to make. It was the introduction to a lifetime of cooking.

And it would not have happened without Julia Child. Even for a 9-year-old, her show was totally intoxicating in its minimalist perfection. She didnt need highfalutin sets or exotic locations or any other such bells and whistles. It was just Julia, her ingredients, and the extraordinary things she did with her ingredients that showed you that you can do it, too. 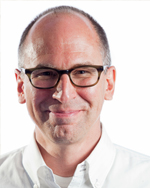 James Oseland is the editor-in-chief of Saveur magazine, Americas most critically acclaimed food magazine. Under his editorship, the magazine has won more than 25 awards, including eight James Beard journalism awards, and an award for best single-topic issue from the American Society of Magazine Editors. James has been an editor at Vogue, Organic Style, Sassy, the Village Voice, and Mademoiselle. He is also a judge on Bravo’s Top Chef Masters.