The Simple Art of Making a Great Salad 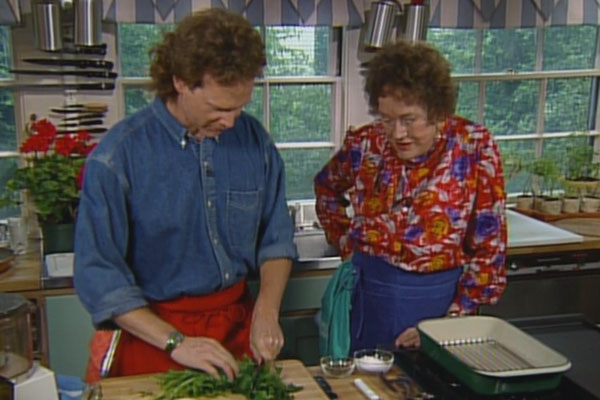 PBS Food asks Chef Gordon Hamersley about his time with Julia Child on the show, In Julias Kitchen with Master Chefs. In the midst of the Julia Child 100th Birthday Celebration, Hamersley pays tribute to her legacy.

I had done a couple of things with her before and I knew she was the ultimate pro. She was warm and gracious, told me to relax and have fun. She made me feel like my recipe that we were filming that day was the best most important recipe to date! She asked all the questions that a viewer would want to know about what I was making and in the end made me feel so comfortable it was like me just teaching her, Julia Child, the same way I would teach a new cook in my kitchen at Hamersley’s.

Apart from the obvious big stuff (changed public TV etc.) I think that Julia will be remembered for her amazing ability to connect with people through recipes. She was the best recipe writer ever. In “Mastering” she took a huge, complex subject and presented it in a way that people could relate to. That approach can be seen today in every cookbook and on every cooking show. It was as if she had made a big discovery and she was excited to explain it to you in terms even you (the viewer,) could get.

In addition, Julia helped to forge the relationship between chefs and non-profits. I met her first in 1981 when she was doing a fundraiser for Planned Parenthood in Los Angles. She said to me that day that I , a young cook, could have a big impact on any cause I chose to be involved with. She said, “And what is more fun than raising some needed money and having a party?!!” There is no denying that today chefs and the non-profit world work very well together.

What was the impact of appearing on In Julias Kitchen with Master Chefs?”

It was great! Bostonians saw the show and would come to Hamersley’s and tell us. They wanted to have the dishes that I cooked on the show and we would oblige. The chicken dish of course was already well known but the green salad was the dish I was most proud of. I loved the fact that Julia had asked me to make a classic bistro green salad on public TV. She totally got the simple art of making a great green salad and also how easy it is to do it badly. And by the end of the day, she made sure her viewers wouldn’t make any mistakes!

Gordon Hamersley is owner and chef of Hamersley’s Bistro in Boston. He was awarded the prestigious James Beard award for Best Chef in the Northeast (1995). Hamersley works at Boston University in its Special Programs Division, and he teaches in many other cities around the country. Additionally, he serves on the board of advisors of the New England Culinary Institute and several environmental groups which help protect New England’s vast natural resources.