When the Cream Bubbles Over | #CookForJulia | PBS Food

Food Home » #CookForJulia » When the Cream Bubbles Over

When the Cream Bubbles Over

PBS Food talks with chef Norman Love, of Norman Love Confections, about his time with Julia Child on the show, “Baking with Julia.” In the midst of Julia Child 100th Birthday Celebration, Love pays tribute to her legacy.

PBS Food: What was it like working with Julia Child?

Norman Love: I have been involved in the culinary industry for nearly 30 years and have had a small handful of the most meaningful and memorable times with Julia. She was witty, funny, and made people feel comfortable, especially for a young pastry chef like me. In Baking with Julia, my topic was pâtissière, which is the batter used in pastries, such as cream puffs. I was directed to make a creative twist to pâtissière, which is a very traditional batter in the industry. I came up with chocolate beignets which was so funny. The following day I arrived in the kitchen and we began the process of baking. The first portion of the recipe was brought out and then the next in segments. At the time, I was preparing a walnut cream sauce. We turned the stove on to heat the sauce and moved on to the next item. The pot began to overheat and the cream bubbled over. She was so upset and embarrassed but we began again. I began again, saying, we are going to make the walnut cream sauce and she said, It would probably be better to use a larger pot. We laughed during the show but viewers didnt see why, that before it was a big mess. Besides the obvious of having the ultimate opportunity to share culinary knowledge, it was one of the most special times out of all the years being in the industry.

Its quite an interesting story how it came about, my time with Julia. I was working for the Ritz Carlton for many years as their pastry chef. I got a call from a customer asking to entertain their daughter because she loved pastry. I would never usually do this but this time I made an exception. I brought the girl down to the kitchen and we played with chocolate. Some months later, a gentleman called reminding me of the time with the girl. It was the girls father and his name turned out to be Jeffry Drummond. He was the owner of A La Carte Communications who produces the Julia television shows. He told me A La Carte was beginning the show Baking with Julia. There would be 13 episodes and he asked if I would like to do some.

PBS Food: What do you believe is Julia Childs lasting legacy?

Love: The obvious answer is the fact that she is the first woman to bring French cuisine into this country. She certainly was a pioneer in assisting American customers to understand the importance of healthy eating, good cooking habits, and French cuisine. Now, teaching is where you see the popularity of shows on food networks. They help to create visibility and knowledge of cooking to the American viewer. They have helped make the culinary industry not so blue collar but much more noticeable and a creditable profession. She was certainly the pioneer in helping bring education, visibility, knowledge and French cuisine to the US. She touched so many professionals today. Everyone admired and loved Julia.

PBS Food: What was the impact of appearing on Baking with Julia?”

Love: I took it as such an honor and privilege to be able to share two days with Julia in her home. Besides my wedding and birth of my children, to sit in her garden at Cambridge and listen to endless stories of her life was one of the most memorable moments of my life. It is such a privilege and honor to be able to call her my friend. For her to know who I am, is something very special and personal to me. To be considered part of the elite chefs to know her was special but nothing compared to my two days I spent at her home.

She is so missed by so many great professionals. She inspires me every day. I just feel fortunate to have the opportunity to have met her on a personal level. 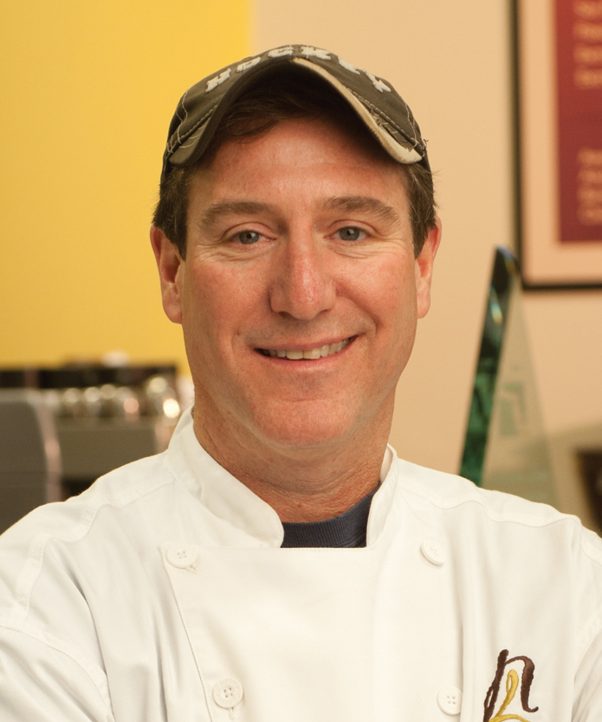 Norman Love Confections, which has been satisfying connoisseurs of fine chocolates since 2001. Norman served as executive pastry chefs for many luxury resorts including The Beverly Hills Hotel and The Ritz-Carlton. In 2009, Norman received the honor of one of the Top 10 Chocolatiers in North America by Dessert Magazine. He is also co-founder of the National Pastry Team Championship. Norman is a regular guest judge on the Food Network Challenge series.