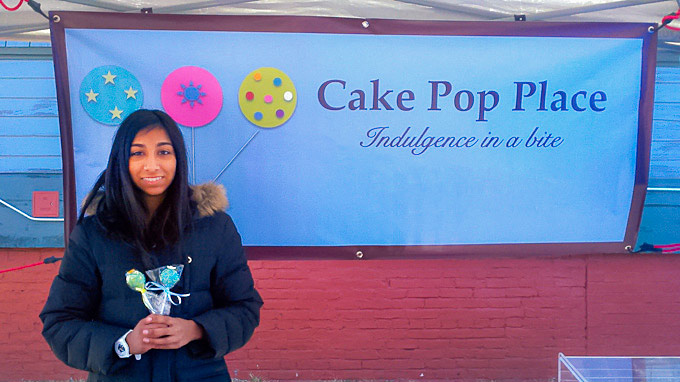 Lots of kids, including mine, get the occasional bug to make or sell something, whether its beaded jewelry, cookies or lemonade.  Usually, after a few hours of hard labor at a table in the sun with sticky lemonade up to their elbows, they decide theyve had enough of work, and they count up their dollars and make a plan for how to spend it.

Occasionally, a child takes the concept much farther, creating his or her own ongoing food business. I am always impressed when I meet one of these kids who give up so much of their free time to not only create their product but also learn about sales, marketing, accounting, and all the other sometimes-dreary aspects of having their own business.

My daughter Celia and I met 15-year-old Yasmeen Haider at the Kensington Farmers Market in Maryland where she sells her intricately decorated and delicious cake pops each Saturday.

Yasmeen started the business as a way to raise the money she needed to take an educational trip to Spain. Although this may seem like a random idea on how to earn money, when I was 8 years old I had wanted to start a cake business. I originally wanted to make birthday cakes for dogs, but since I was young, I never had the chance. Now that I am older, I rediscovered that interest, tweaked it to fit into the most modern form of cake, and created the business I had always wanted to start!, Yasmeen said.

The most rewarding thing I have experienced from running the business is my new understanding of making friends and speaking with adults. As a child I was shy, and I cannot believe that now I am able to initiate a conversation with a complete stranger without feeling nervous. I have learned to have make friends, young and old, and also relate to people I may not have any similarities with. I believe that this is not only helpful in my business, but that it will aid me in the rest of my life as well, continued Yasmeen.

14-year-old Tim and 10-year-old Holly West began selling their home-baked banana bread at the Carlisle (MA) Farmers Market 3 years ago.  Each week they make about 30 small loaves that they sell for $3 each. (Thats a lot of mashed bananas!). They find having their own business so gratifying, especially because they almost always sell out of their loaves.

They started their business because they wanted something to do over the summer and wanted to make a little money, according to Tim. The most rewarding part of having their own business? Seeing the surprise when people sample your product, and didnt think two kids could make that, said Holly.

At the Partnership for a Healthier America summit a few months ago, I met a charming 13 (now 14) year old boy named Carter Kostler of Virginia Beach, VA, who has created a way to make it easy for kids to drink all natural fruit-flavored water on the go.

Carter noticed that lots of kids were bringing sugary sports drinks and juices to athletic games and practices. He loved drinking water infused with fresh fruit at home, so he invented a way to make fruit waters portable with his Define Bottles. His goal is to help reduce childhood obesity and Type II diabetes by offering a healthy alternative to soda and other sugary drinks. Carter has gotten national attention and accolades for his idea and even had an opportunity to meet and speak in front of President Clinton and First Lady Michelle Obama.