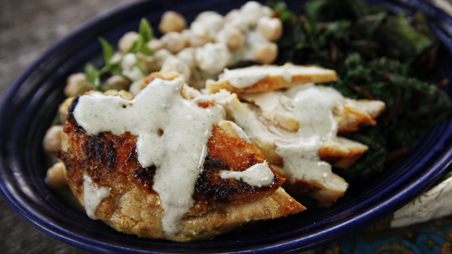 I often cook the same dishes over and over again because they are familiar.  Spaghetti with marinara, teriyaki chicken, pasta in garlic cream sauce, and grilled chicken are just a few of the regular dishes I prepare every month.

Because I’ve been eating these frequently lately meal time has felt a bit boring.  Can anyone relate with this?  While paying for groceries today I started to think about what other ingredients I had at home to make dinner with.  Remembering I had a can of garbanzo beans in my pantry, a half empty container of Greek plain yogurt,  and an aggressive mint garden taking over my front yard, I found just the inspiration I needed to elevate the ordinary chicken dinner I planned on preparing into something flavorful and different.

I decided to make a simple mint yogurt sauce to drizzle over the chicken or perhaps use as a salad dressing.  I was pleasantly surprised at how much I enjoyed this sauce and how it enhanced the quality of dinner.  The sauce itself was easy to throw together and after tasting it I had another brilliant idea.  I opened up the garbanzo beans, dumped the beans into a strainer, and after rinsing them, tossed them in the mint yogurt sauce and suddenly I found myself with an East Indian type of bean salad.  After one bite I knew I could add the mint yogurt sauce to my cooking repertoire to use in multiple ways.

However, would this sauce be approved by my children?  Well sort of.  Something I’ve been trying to do more often is encouraging my children to be more open minded to tasting new foods.  Especially foods which are enhanced by spices or flavors they are not accustomed to.

The kids initially rejected the sauce because it was unfamiliar.  I spooned a teaspoon of sauce on each persons plate anyways.  The sauce sat there untouched throughout dinner.  By the end of our meal, each child did try the sauce without a full on protest.   This is what I consider a victory in our home!  When introducing new foods to children its important for parents to remind themselves that the food battle isn’t won when the plates are cleared off.  Instead, by just continually exposing our children to all sorts of different types of food it opens up the possibility they may someday like it.  It always starts with just one little bite.