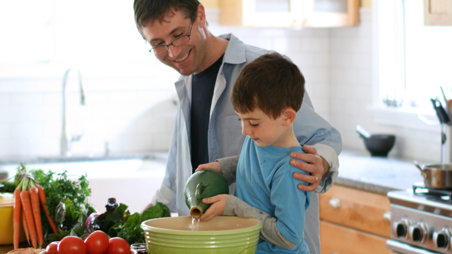 J.M. Hirsch, the Associated Press food editor and author of the new cookbook High Flavor. Low Labor., is more than slightly obsessed with food that bursts with flavor and can elevate simple meals into sensory feasts. But hes even more devoted to sharing his love of cooking, eating and even shopping for food with his six year old son, Parker. Read my interview with Hirsch, below, for some surprising lessons for those of us who want to raise kids who love food and know how to prepare it.

Dont forget to watch the video about why Hirsch gave his son his very own Chefs knife when he was just two years old. And read on for Parkers favorite recipe to make with his dad, Pasta Carbonara.

J.M., I know its so important to you to involve your son in the kitchen. Why is that such a high priority for you?

Food isnt just about eating. Food is about community and family and culture. Thats why studies continue to show that coming together at the table as a family is so important. To me, that process begins when we buy our food. I want my son to understand where food comes from and how it gets to his plate. Thats how he will appreciate the work that goes into both producing food and preparing dinner. I bring him to our local farmers market every week because I want him to know the people who grow his food. I take him to the grocery store so he understands how lucky we are to live with such abundance. And I involve him in making dinner because I want him to understand the joy  and hard work  involved in making something that tastes wonderful.

And thats deep stuff. But some of it is more practical than that. Understanding how to shop for and prepare food is a basic skill we need to live healthy and independent lives. And involving kids in the kitchen is fun. My son has come up with so many great recipes. And together weve come up with great games to play while cooking. Think of it this way — we all live busy lives and none of us has nearly as much quality time with our kids as we like. So why not use dinner as an excuse to squeeze another 30 minutes of together time into each day?

From what age did you start including Parker in your meal preparation?

The day after Parker came home from the hospital, I took him on a smelling tour of the kitchen. I held him in my arms and walked him around, opening everything  spices, sugars, coffee, honey, whatever  and held it up for him to smell. When I cooked I had him in his bouncy seat on the counter next to me. When he was old enough, hed sit on the counter and play with scraps while I made dinner. And as soon as he was able, I had him stirring, scooping and doing all the many things kids can help with. I also have always involved him in the shopping. His first trip to the farmers market was when he was a week old.

As a child were you welcomed into the kitchen? When did you learn to cook?

Food has always been a big deal in our family, so my parents were supportive of my efforts from an early age. The first time I truly cooked a meal I was about 5. Id seen a television chef make a steak in a skillet and wanted to try. So my parents bought me one and left me to it. Kind of crazy, now that I think back to it. I decided dumping Worcestershire sauce in the pan as the steak cooked was something a real chef would do. As I recall, it ended up being pretty tasty.

Being a bit of a mongrel family with Jewish-French Canadian-Russian-English roots, we didnt have one overriding culture to draw on for our food traditions. So we created our own. We were adventurous eaters and did a lot of traveling. We used to joke about eating our way around the world. We learned Thai cooking back at a time when most people thought we were saying tie. And spanakopita became our Thanksgiving centerpiece (and still is).

Whats this about giving Parker his own chefs knife when he was 2? Has he ever come close to injuring himself? He must be a pretty calm and obedient kid, no?

Never. Not once. Not even a little. I did give him a knife when he was 2, but it came with some pretty important rules. The most critical of which is that when one hand is one the knife, the other must be at his side. It doesnt teach proper knife skills, but it makes it virtually impossible for him to hurt himself. It also keeps him involved in the kitchen and teaches him confidence and responsibility. As for him being calm and obedient Hes a 6-year-old boy. At this age, its in his DNA to not be calm and obedient! Hes just like every other kid  he can be crazy and he can be an angel, often simultaneously. But use of a knife is one of those privileges he knows he will lose if he doesnt take it seriously. And he loves helping me in the kitchen, so while he gets himself in trouble in plenty of other ways, he never has messed around with the knife.

(Click here to watch the video of Parker and his knife.)

What are some of Parkers favorite kitchen jobs? You mention he loves to make spice blends and rubs.

I like to let Parker handle basic chopping  onions, peppers, carrots, things like that. I also let him peel vegetables, measure out spices and dry ingredients, work the controls of the food processor and blender. These are all tasks that not only keep him busy while Im trying to make dinner, but also help me.

But his favorite task is making the spice rubs. Its a pretty simple concept. I was cleaning out my spice cabinet one day and Parker asked if he could play with the ones I was getting rid of. He spent 30 minutes mixing and smelling and tasting. When he was done, hed actually made a delicious spice blend that we tossed with cubed butternut squash, then roasted. It was wonderful. Thats when I got the idea of assembling a spice box for him. I give him castoffs from my spice cabinet, or grab bargain bottles at the dollar store. He can mix and play with them as he likes. And then I try to use it in a meal, usually turning it into a meat rub or spice blend for roasted veggies. Its a great and safe way for him to explore flavors and contribute to the meal.

Are there any tasks you still keep Parker away from in the kitchen?

Does Parker make any dishes all by himself?  We know he doesnt like soup, but what are some of his favorite dishes in the book? Do you have a favorite meal or dish to make together?

He does like to sometimes make breakfast on his own, though that can be a bit of an ordeal. For no particular reason, everything in our kitchen is very high, so its a real effort for him to do everything. What he really likes is to create recipe ideas, then work with me to make them. For example, he came up with the idea for a macaroni and cheese sandwich. I thought it was pretty neat, so we tried it together. We came up with a whole-grain macaroni tossed with a low-fat (but high-flavor) melted cheese sauce ladled between slices of whole-wheat bread. It packs some serious carbs, but it was a healthy and delicious dish. And he loved that it was his idea.

As for a favorite meal to make together That would be pasta carbonara. Its his favorite meal. And on nights when we both need a bit of easy comfort, that is our go-to dish.

What do you do if Parker doesnt like a dinner that you make? Do you make him something else?

Nope. I make one dinner. He doesnt have to eat everything, but he does need to try everything. But I also try to keep his preferences in mind. After all, just because kids are small doesnt mean they cant truly dislike the taste of something. So if Im making something new that Im unsure whether he will like, I try to make certain the other parts of the meal are things he does enjoy. That way he can try the new item, eat it or not, then still eat the rest of the meal.

What are your tips for other parents who want to get their kids more involved in cooking?  Any special tools or skills needed?

First, learn to embrace mess. Kids in the kitchen are messy. But 20 years from now, will you cherish memories of a clean kitchen or having baked cookies together?

Second, kids of any age can be involved in the cooking. You dont have to be quite as crazy as me and give you child a knife at the age of 2. Measuring out flour, rice, sugar and spices are things any kid can do. Even if all you do is give your child an empty metal bowl and a wooden spoon for pretending to cook alongside you, thats a great start.

Third, get the kids involved in the food decisions. If children feel invested in the process, they are more likely to want to help. They also will be more likely to eat something if they had a hand in it. So bring them to the store and ask them what they want. You set the boundaries, of course. But its an easy way to get them thinking about food.

Fourth, make it an adventure. Every week we make a point of trying something new. It can be anything  a new type of fruit juice, a strange piece of produce, something out of the ethnic aisle, a new cheese. Whatever. Make a point of sitting together to try it, decided whether you like it and what you can do with it if you do. Every few weeks I bring my son to our local cheese shop and he samples his way through the cheese case and picks a few new ones.

Fifth, dont forget to make it fun. We have a number of games we play. One is strawberry stealing. Ill cut up some berries and place them at the edge of the counter, then sternly warn him that he is not, for any reason, to eat any of my berries. Of course, this causes him to fall down laughing and he spends the next 30 minutes finding new ways to sneak in and steal and eat my berries. He may not be cooking, but were in the kitchen together and having fun. We also play the spice smelling game. I open up bottles as we cook and have him sniff them and try to identify what they are. Yeah were geeks like that. But he and I have a blast.

Visit J.M. Hirschs blog to get some fabulous recipes and learn more about his new book: www.jmhirsch.com

My son is a fiend for carbonara.  But true carbonara can be a fussy dish.   Which means I never make traditional versions.   This recipe not only eliminates the fuss, its totally forgiving.  Use whatever deli meats and hard cheeses you have; its a great way to finish up those bits and pieces in your refrigerator.  You can use the more traditional bacon, but it will take longer to cook.  I prefer a combination of ham, prosciutto, and turkey breast paired with a blend of Parmesan and pecorino.  Whatever you use, you cant mess this one up.