As a kid growing up in Québec, maple syrup season was a much anticipated time of year. Every March, the local maple syrup producers would set-up rows of snow-packed troughs that stretched all the way down the schoolyard in preparation for tire d’érable (maple syrup taffy). From grades one through six, the entire student body would pack like sardines, a rainbow of hats and scarves, popsicle sticks in hand, as generous ribbons of hot golden maple syrup were poured all up and down the snow. There would be an awestruck silence as we watched the hot syrup solidify into a gooey taffy as it hit the snow and then we snapped into action, wrapping as much of the taffy as we could around our little sticks. 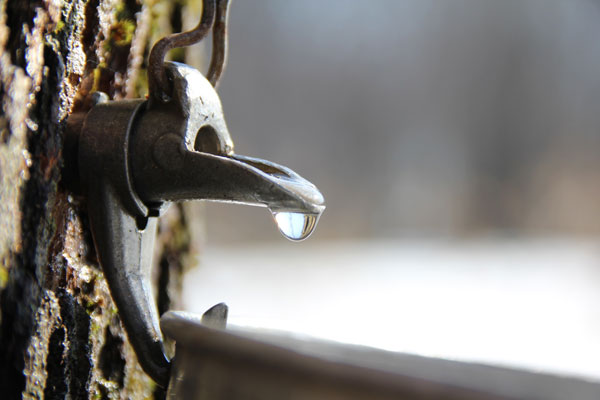 Every spring, my dad makes his very own homemade maple syrup. He taps five large maple trees on his property just east of Montreal and produces about 2 1/2 gallons of syrup, enough to last him for a year, including the many gift bottles destined for family and friends. 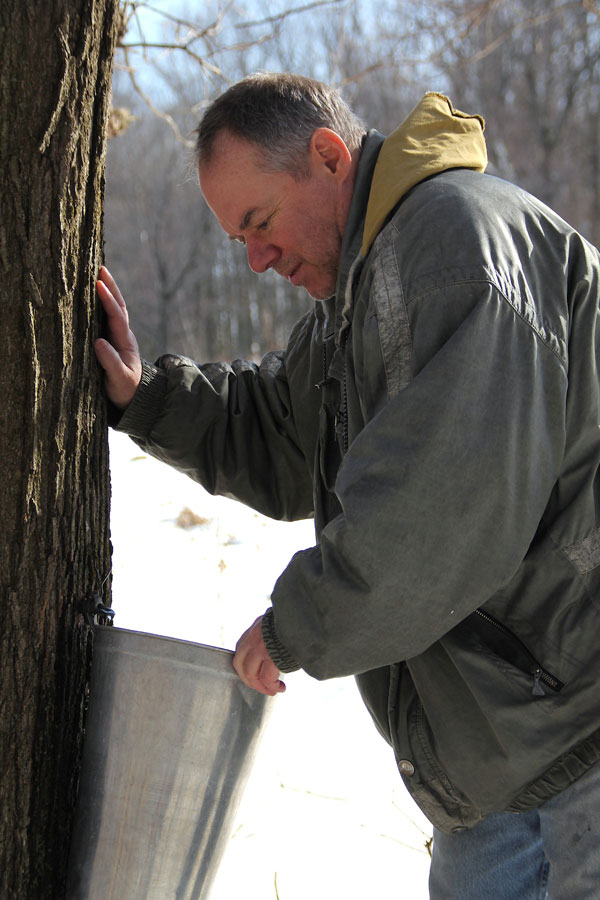 He evaporates the sap in a big pot right on the woodstove in his living room, joking that it’s the lazy way to do it, since the maple syrup basically makes itself. To get a gallon of maple syrup, you need forty gallons of sap, so it takes some time for that much water to evaporate, especially when you’re doing it the slow way, like my dad. But sure enough, after a few days of evaporation, a light syrup is left behind, which he transfers to his kitchen stovetop to ensure it reaches the required temperature of 219º F. He then filters it through a piece of thin cotton and bottles it up. 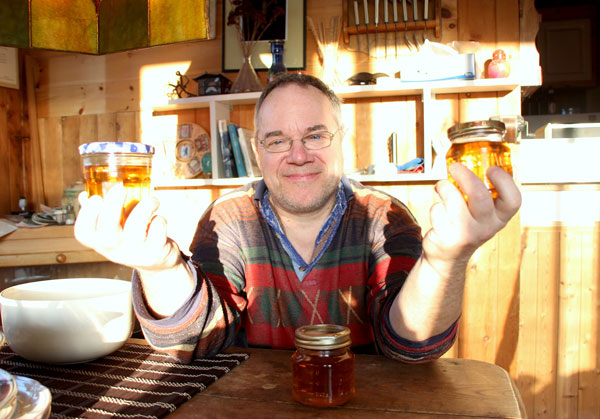 A couple years ago, I joined my dad on his maple syrup-making adventure and I filmed the video you see above. With the birds gossiping away and the wind whispering promises of warmer days ahead, it was easy to see why my dad loves this springtime ritual so much. I enjoyed seeing his enthusiasm for the whole process. My dad has always managed to get by on very little but he lives by the philosophy that you don’t need money to enjoy the finer things in life. He is fond of telling me that maple syrup is a gift from nature, one which we can choose whether or not to accept. He believes it would be a shame not to accept this gift given that he is surrounded by large sugar maples. Ironically, he lives just up the road from a commercial maple syrup producer and has always had access to all the maple syrup he wants. It’s obvious that the choice to make his own comes from the tremendous enjoyment and satisfaction that he experiences from the process of making it himself. It reminds me of a quote I’ve noticed floating around on the internet: Happiness is homemade. 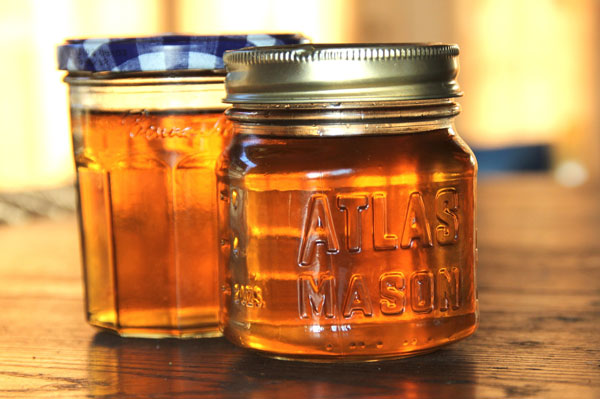 When my dad is making syrup, the intoxicating smell of maple infiltrates every corner of the house. That’s why I love to make this pie each spring. It also makes the whole house smell amazing and it reminds me of my dad’s place. Plus, there is nothing like the taste of a maple syrup pie, it may just be my all-time favorite dessert (aside from Baba au Rhum of course!). 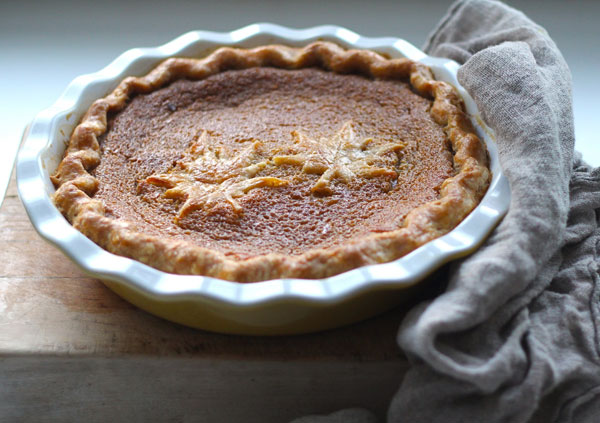 In Québec, maple syrup pie is very traditional and there are many different ways to prepare it. Some people add sugar to the filling, but to me, this is like cheating a little bit. I like my pie to be made exclusively with maple syrup for a purely decadent experience. 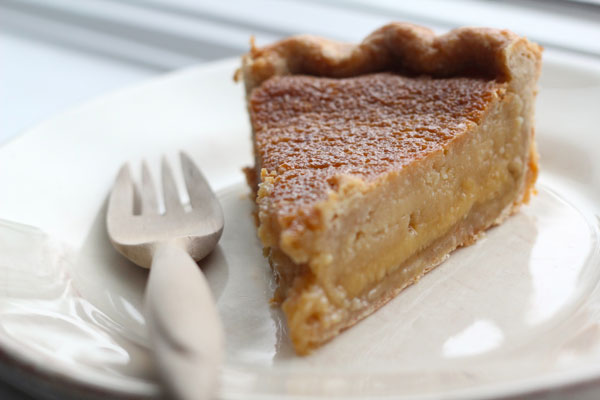 You can use any grade of maple syrup for this recipe, so long as it is true maple syrup (no sugary imitation syrups). I recommend certified organic maple syrup because it is has to adhere to stricter regulations and the use of chemicals such as defoaming agents are banned. 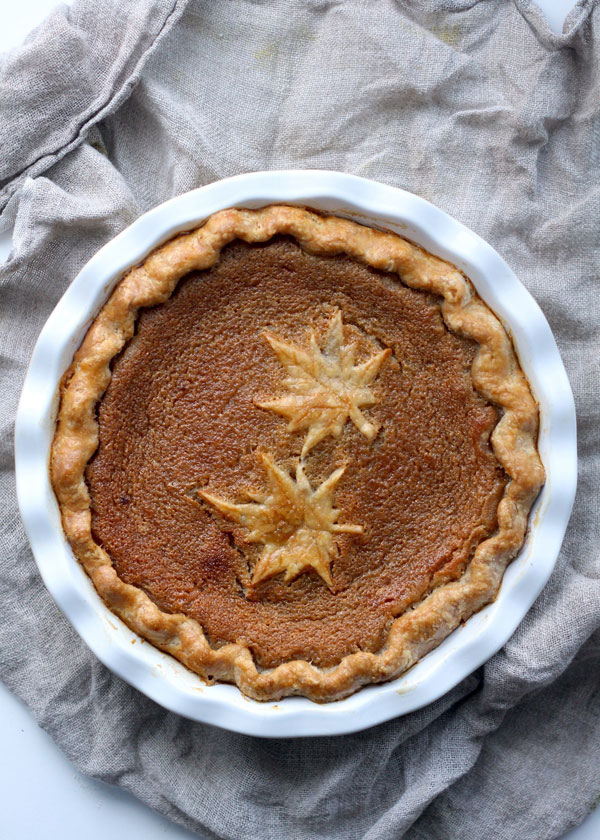 From Aube Giroux of the Kitchen Vignettes blog: This Canadian maple syrup pie is a decadent Winter treat that fills your home with the maple syrup aroma.