Late this summer, I helped my beau harvest his organically-grown wheat. He grows several varieties, many of them heirlooms, and it was breathtaking to see the fields go from lush green-blue to crisp and golden through the season. 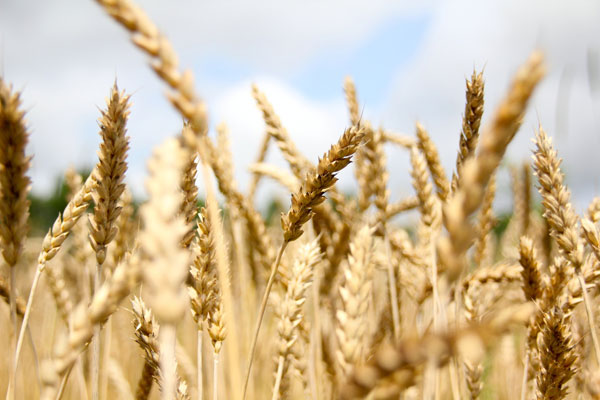 Earlier this summer, we finally buckled and bought a KoMo kitchen flour mill which we had been coveting for a long time. Our mill is our new best friend, turning just about any grain into flour. It’s so enjoyable to mill our own wheat into flour, on demand. Fresh and fragrant, its flavor is incomparable. And having whole wheat flour on hand was perfect for baking this groaning cake which my sister and I recently made, to celebrate the arrival of her baby. 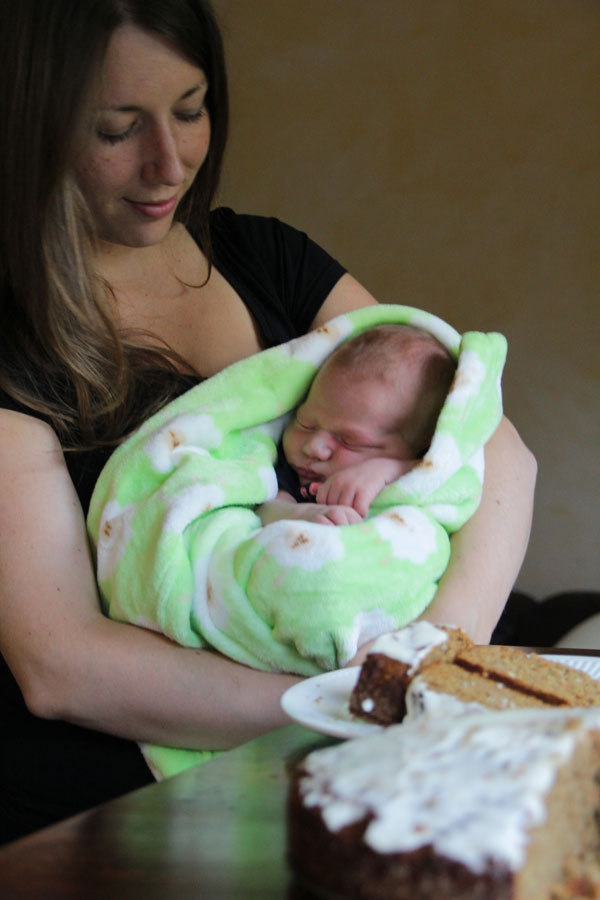 If you’ve never heard of it, you’re probably wondering what in the world is a groaning cake? If you follow my blog, you may remember my post about Zrir, a hazelnut-sesame caramel that is traditionally eaten in Tunisia, following the birth of a new baby. It turns out many cultures have special “birthing foods” and a groaning cake is an ancient English tradition.

I first heard about groaning cake during the frigid weeks of the polar vortex this past winter. While my sister was in her early pregnancy and my sweet nephew was probably still the size of a peanut, I was having what can only be described as a romantic relationship with my woodstove and Ami McKay’s award-winning book, The Birth House. While trying to stay warm on those snowy nights, I immersed myself in the magical world of Dora Rare, a midwife in the early 1900’s. Her story is set in the small village of Scott’s Bay, just a few steps away from where I grew up in Nova Scotia. The book refers to “groaning cake” as a kind of spice cake that is traditionally prepared and shared around the time of a birth. Though the book is a fiction novel, the custom of making groaning cake is very real. McKay describes it as follows:

“The tradition of a groaning cake, or kimbly, at birth is an ancient one. Wives tales say that the scent of the groaning cake being baked in the birth house helps to ease the mothers pain. Some say if a mother breaks the eggs while shes aching, her labour wont last as long. Others say that if a family wants prosperity and fertility, the father must pass pieces of the cake to friends and family the first time the mother and baby are churched (or the first time they go to a public gathering) after a birth. 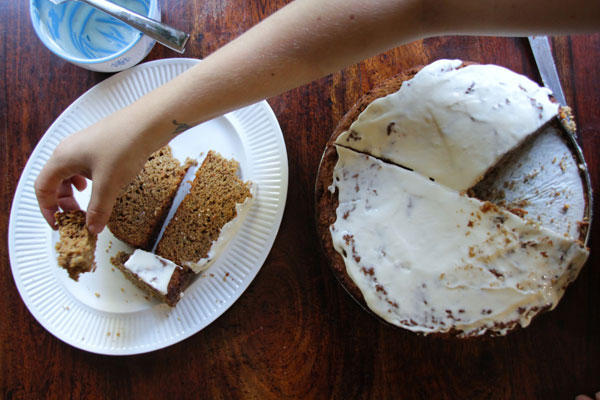 “Two young men I knew about thirty years ago were taking a walk in West Cornwall; crossing over a bridge they met a procession carrying a baby to the parish church, where the child was to be baptized. Unaware of this curious custom, they were very much surprised at having a piece of cake put into their hands.”

My sister and I had fun making this time-honored cake. We took a few liberties with the ingredients since the recipe varies depending on where you source it. We wanted to make a version that would be extra nourishing to help her regain her strength after the birth, so we used whole wheat flour and chose honey and molasses as our only sweeteners. We used four eggs to give the whole wheat flour some lift and give the cake some good protein content. Our version includes grated carrots, zucchini, apples, and coconut for a hearty crumb. We also added ground fennel and fenugreek to the more traditional spice mix, since both are helpful in stimulating milk production. Before eating the cake, we slathered it in maple syrup-sweetened cream cheese frosting for good measure.

The cake was fragrant and wonderfully nourishing. A meal in a slice! In case you were wondering, we did make a few different versions, and the one we settled on has a lot less molasses than what you’ll see in the video.

We both recommend this cake, not just for new moms, but for anyone looking for a nutritious cake, perfect for these cooler fall days. Bon appétit! 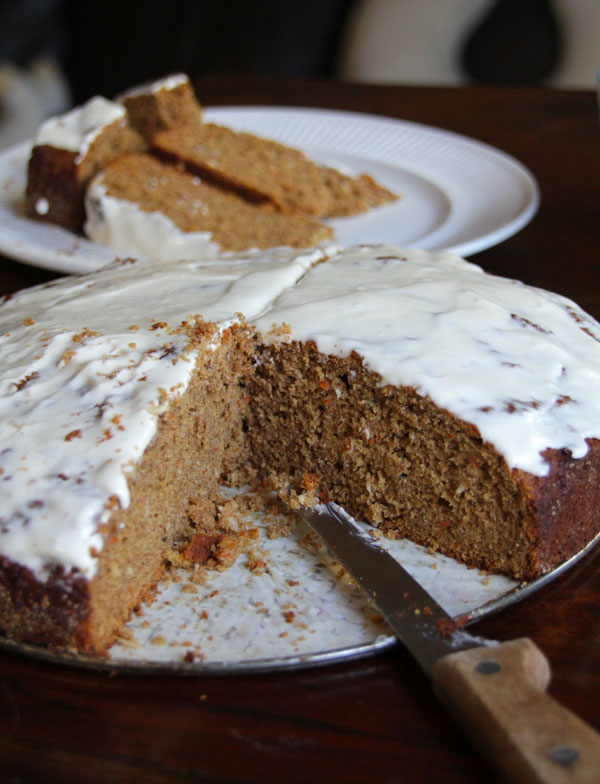 Groaning cakes are a traditional recipe packed with nutrients for postpartum care. (Recipe Courtesy of Aube Giroux of the Kitchen Vignettes Blog)