If you’ve been following this blog, you may have noticed that I love cream. A lot. Like many people, I especially like it in its frozen incarnations. And I recently discovered the joy of semifreddos, which I need to share with you. Semifreddos are in the ice cream family, but they’re usually made in a loaf pan and served up in frozen slices. Here’s the best part about them: you don’t need an ice cream maker! 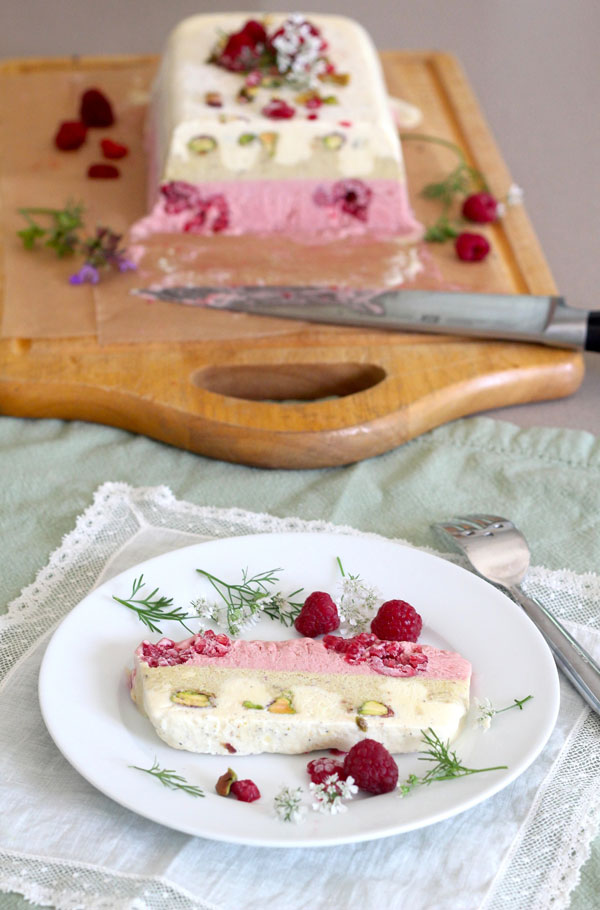 I know some of you might shudder at the amount of cream in this recipe. And before you run away screaming, I encourage you to consider two things: one is the amount of store-bought ice cream the average person consumes in a summer. Have you looked at the ingredients on a container of ice cream? It’s a long list of un-pronouncable words, usually not a good sign. At least when you make your own, you can control what goes into it. The second consideration is the quality of the cream. I like to use organic cream from grass-fed cows, and here’s why: cows were designed to eat grass, not grains. Milk fat from grass-fed cows is much healthier for us, containing a better ratio of omega 6 to 3 fats and more beneficial nutrients. So while I’ll make no pretense that this semifreddo is a “healthy” dessert, I’m pleased to say I experience zero guilt eating it, only pure pleasure, and I hope you will too. That’s what summer is for! 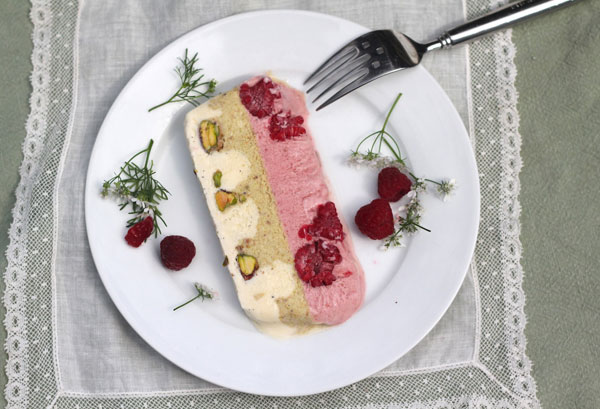 As for the raspberries. Oh the raspberries! Picking raspberries is such a great summertime treat. As soon as I starting puréeing the raspberries for this recipe, the fragrance of the mashed-up berries vividly brought me right back to my Grammie’s kitchen. She had a wonderful berry patch and I have great memories of the raspberry jam she made each summer, the heavy pot bubbling away with ruby red goodness, the smell wafting through the entire house. 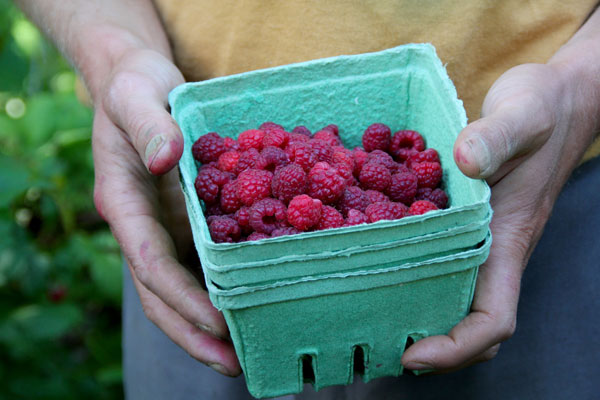 Initially, I was just going to make a simple raspberry pistachio semifreddo, but then I saw this triple layered recipe from Bon Appétit which I couldn’t resist. I made a few modifications and voila! 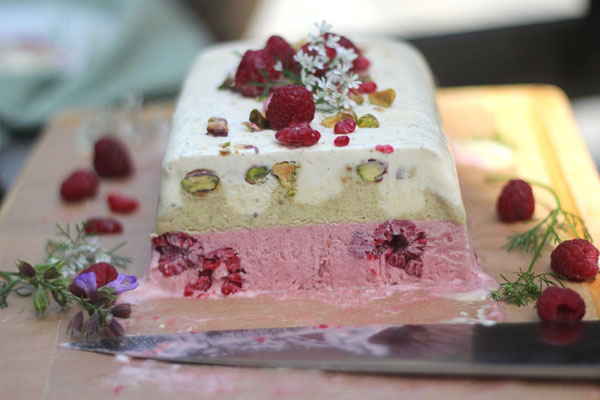 Now, it must be said, the 3 layers do make this recipe a bit time consuming since each one has to freeze solidly before adding the next layer, taking about one hour per layer. If you’d like to simplify this semifreddo, I’ve provided a short-cut version at the bottom of my recipe that doesn’t involve making 3 separate layers. Instead, you simply make one uniform raspberry vanilla mixture and add the whole pistachios to that. I’ve made it this way as well, and it’s just as delicious. Here’s what that version looks like. 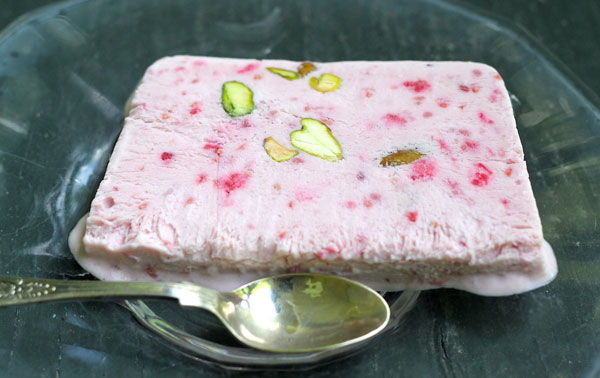 Watch how food blogger Aube Giroux makes this raspberry semifreddo recipe in this web episode of Kitchen Vignettes. This recipe is adapted from Bon Appétit.

For a simplified version of this recipe (no layers), simply omit the pistachio base altogether. (You won't need the 2 tbsp of sugar and the 1/3 cup of milk). However, do keep the cup of whole pistachios. Make everything else following the directions, but the raspberry, vanilla, and semifreddo bases can all be mixed together to make one uniform mixture. Fold the whole pistachios into this mixture. Freeze for 6 hours or more.