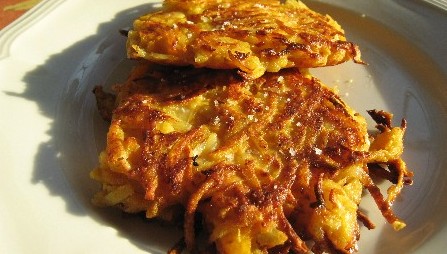 Fried potatoes, spinning tops, flickering candles and eight nights of festivities: Whats not to love about Hanukkah? Yet Hanukkah is a quirky holiday for us American Jews. Its actually a very minor celebration on the scale of our religious holidays, celebrating an ancient battle victory and the rededication of a holy temple in Jerusalem.  Yet because it falls near Christmas, it has evolved into a more significant holiday in the U.S., partially so Jewish children dont feel left out of all of the celebrations and gift exchanges in December.

For most of us, Hanukkah would not be the same without fried potato latkes served with applesauce and sour cream. (Conventional Jewish wisdom holds that the frying oil used to make the potato pancakes is a reminder of the miraculous oil that kept the flame alive for eight days when the temple was under siege.) When my mom used to make latkes, she would deep fry the crispy pancakes and the whole house would smell like potatoes and oil for days. Then wed feast on the pancakes, usually as a side dish with brisket or other meat, and wed play dreidel for pennies or golden chocolate coins after dinner. While I still adore my moms version, Ive created a nontraditional healthy twist on the tradition by adding sweet potatoes to the mix and using a lot less cooking oil.

Your kids will probably love showing off their strength by helping you grate the potatoes (my family thinks latkes taste best if the are grated by hand), but they might want to stand back while you cook the latkes as the oil can splatter. If you have a big electric skillet, I think it works best for cooking the potato pancakes.

Afterwards, be sure to play a few rounds of dreidel. The four Hebrew letters on the spinning top stand for the phrase a Great Miracle Happened Here.  (For the rules and key to the Hebrew letters, visit www.kveller.com.)

Note: If you make the batter ahead of time, refrigerate it until you are ready to cook them, and drain the excess liquid from the bowl before frying them.