How to Grill Corn on the Cob Quickly 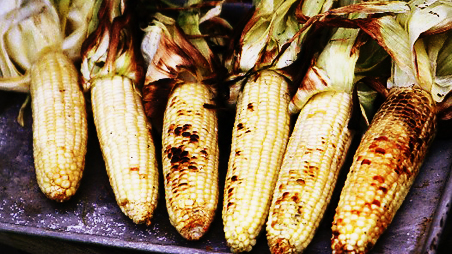 It is reasonable to assume that grilling corn on the cob is quick and easy to do.  At least one would think so.  But no, there is nothing quick about grilled corn on the cob.  I learned this the hard way when I decided to grill steak along with some ears of corn a few years ago.  Long after the steak was done and already consumed, my husband and I were still checking the texture of the corn every couple of minutes.  After waiting well over 30 minutes I lost all hope and settled for an extra serving of salad.  I remember thinking how ridiculous it was that I could grill a chicken breast in less time than an ear of corn.  This was not acceptable to me and I challenged myself to come up with a quicker solution.

After experimenting with different methods I came up with a brilliant method of preparing corn on the cob much more quickly without sacrificing the flavor of grilled corn.  My solution involved steaming the corn using the microwave first, then finishing the corn off on the grill.  I was surprised by the flavor and texture the microwave method produced, better than boiling the corn, which is how I normally prepare it.  This is the only way I prepare grilled corn now.

My kids also love eating corn on the cob prepared this way.  They can never get enough and with the three day holiday weekend approaching, this method of preparing corn will go perfectly with your hamburgers and hot dogs. Enjoy!

Corn on the Cob

Reduce the overall grilling time by precooking the corn first to make a perfect grilled corn on the cob.

Alice Currah is the publisher of popular food blog, Savory Sweet Life. Her approachable everyday recipes are accompanied by beautiful step by step photos and have been featured online at Martha Stewart, Real Simple, The Pioneer Woman, Epicurious, Bon Appetit, Saveur, iVillage and many more. In March 2010, Forbes.com featured Alice as one of Eight of the Very Best Food Bloggers. You can find her on Twitter, Instagram, or Facebook.