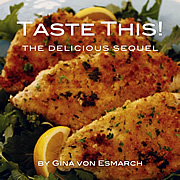 When cookbook author Gina Von Esmarch compiled a collection of her favorite family recipes while between two jobs, she probably didn’t imagine this would lead to her authoring not one but two cookbooks.  But that is exactly what happened.  At her husbands urging, Gina had her recipes professionally photographed and published her first cookbook Taste This!.  The success of her first cookbook led her to release a second cookbook titled, Taste This!: The Delicious Sequel.

Today I have the pleasure of sharing my interview with Gina as well as her recipe for Lemony Chicken Milanese with Arugula Salad from her latest cookbook.

Alice:  How would you define your cooking style?

Gina: The basis for my cooking style is a blend of Northern and Southern Italian cuisine, and I find that I tend to default to this style predominately when cooking formal dinners.  Despite my married name, I am 100% Italian (well at least by American standards, some Italians might denounce that I am 100% Italian because of my South of Rome roots). My everyday style is California Cuisine  taking all sorts of cooking inspiration from the foods and cultures around me. I like to infuse my dishes with a bit of spice, never enough to over power the flavor, but enough to find that rich balance.

Alice: Have your kids developed their own cooking style in the kitchen and how has it evolved from when they were younger?

Gina:  My kids love to cook. Style? Is licking a bowl considered a style?  In all seriousness, my daughter has evolved from preparing no cook meals, like a Brie and tomato sandwich, to utilizing the stovetop and oven more comfortably, to make cheesy eggs, biscuits or a cake. My son likes to discuss food combinations and then help me create the end result.

Alice:  What advice would you give parents for feeding picky eaters?

Gina: I think there is a time when all children become picky about food. My kids are now what I consider to be good eaters, meaning that they will try new foods and eat what they are served 90% of the time. That said, a few things definitely helped me to get them over that hump:

a) Veggie adoption: Pureeing vegetables into soups really helped the resistance I was facing every night at dinner and furthered my effort to get them more accustomed to those healthy flavors. I also liked to make desserts with vegetables; zucchini cake, carrot cake, apple rhubarb pie. Its the same idea – foster veggie adoption.

b) Theres only one dinner: I stopped catering to their refusal to eat what I had cooked. For four nights one week, I responded, This is not a restaurant, this is what we are having for dinner tonight. It is important to try new things but if you really dont like what I cooked I can get you a few slices of bread and a glass of milk to fill you up, but there will not be any dessert. Interestingly enough, they only took me up on this offer once.  They did question me for four nights straight, but you cant blame them for trying.

c) Kitchen time: The more I involved my children in the kitchen the more enthusiastic they were about dinner. It does take a little longer to prepare a meal sometimes, but I believe it is ultimately helping them to make good food choices.

Thank you Gina for your thoughtful advice on how to feed picky eaters.  We appreciate you sharing your family’s most popular dish from your cookbook, Taste This!: The Delicious Sequel.

For more of Ginas delicious family recipes and to learn more about her cookbooks, visit her at her website at http://bowllicker.com 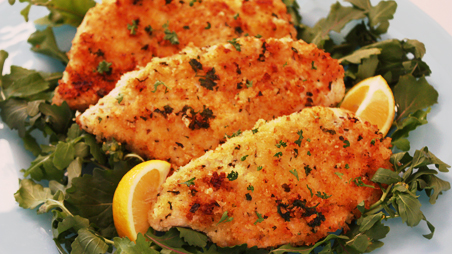