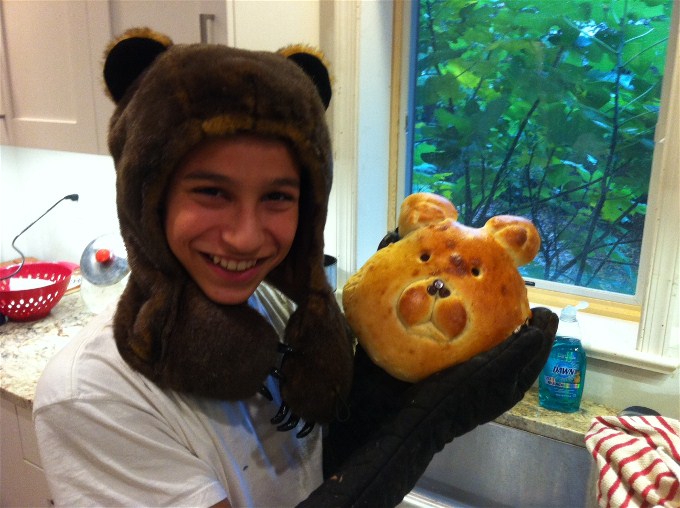 Who doesnt love fresh baked bread, warm out of the oven? And how irresistible is it if its shaped like kids favorite animals? Baking animal-shaped breads is such a fun weekend or stormy day activity, as my son Solomon and I discovered last week. The biggest challenge, we found, was eating his lovable creationsthey took on such personality once baked!

Kitchen Explorers reader Amy Shaunette had asked me to do a post about fun-shaped breads like alligators, turtles, frogs and other animals. Since the cooler weather is great for indoor projects like baking bread, and my family is currently trapped in the house because of a big fall storm, we decided to take her advice and explore some of the adorable creatures we could shape from homemade bread dough.

My son Solomon had some free time, which doesnt happen all that often with our teenagers, and he took me up on my offer to make animal breads. While I watched, he mixed and kneaded the dough, and after it rose for 10 minutes, he formed one half into a grizzly bear head, and the other half into a turtle. Then we let it rise again for 45 minutes, he added some detail, and we brushed it with egg wash and baked the loaves. We followed the recipe below from Become a Better Baker.

It was hard to rip off the first piece to try a bite because they were so cute, but once we tasted a bears ear, it was hard to stop. I feel so lucky that we were both home on this blustery day and that the power stayed on long enough to let us finish his creations. But most of all, I feel blessed that my 10th grade son will still bake with me, at least once in a while.

Here are some other recipes and photos of animal-shaped breads. I hope you and your kids will create time to give them a try!