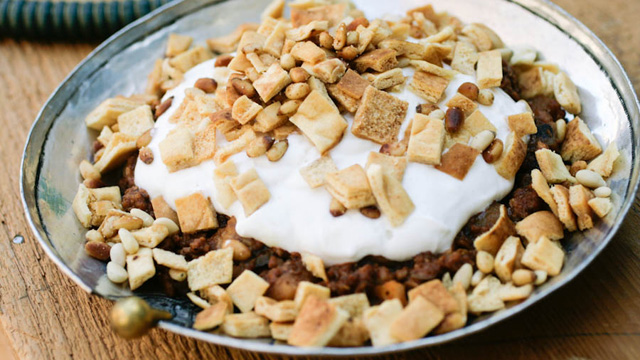 The word fatteh means "to crumble" in Arabic and this is the idea behind this dish. Bread that is somewhat stale is crumbled, toasted, and layered with a variety of ingredients including a yogurt sauce and some fried pine nuts.

This fatteh is an eggplant and minced lamb version. It can easily be converted to a vegetarian dish by omitting the meat and replacing it with coarsely ground walnuts. There are at least ten versions of fatteh in Lebanese cuisine: chickpea fatteh, chicken fatteh, lamb fatteh, kafta fatteh, stuffed eggplant fatteh, lamb feet fatteh, lamb tongue fatteh, etc. Fatteh is a popular brunch dish especially in the coastal city of Tripoli in Lebanon.