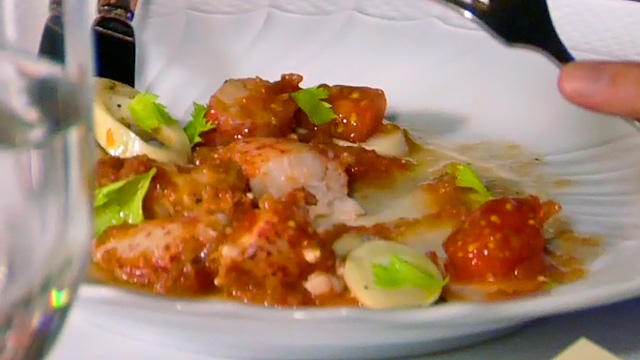 "Throughout history, Sardinia has been a territorial prize for the great powers of the Mediterranean Basin, and every period of dominion has left its mark on the island. One of the most distinctive influencesboth cultural and culinarywas the 400-year rule of imperial Spain, from the early 1300s to the early 1700s. Today, in Alghero, on the west coast of Sardinia, residents still speak a form of the Catalan language. And the spiny lobster that abounds in the waters off Alghero is prepared alla Catalanacooked, chopped into large pieces, and tossed into a salad. In Sardinia, it is expected that you will grab a chunk of lobster from the salad with your fingers and dig into the shells with gusto. Here at home, I do the same thing with our great Atlantic lobsters, which are certainly as good as if not better than their Mediterranean cousins. I prepare them alla Catalana and serve them Sardinian-style, with lots of moist napkins and bowls for the shells, encouraging everybody to dig in."
--Lidia Bastianich