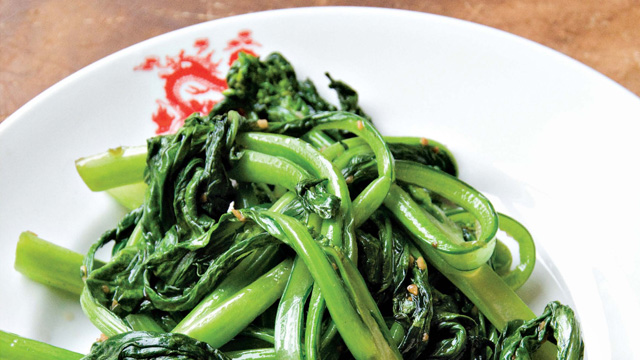 From "Stir-Frying To The Sky's Edge," by Grace Young

When George Chew stir-fries yau choi (also known as choi sum) he's able to cook twice the amount called for in this recipe because of the power of his Wolf range. For cooks using stoves with average power, no more than 12 ounces should be cooked.

Check the width of the stalks about 1 inch from the bottom: if they are ½ inch or more in diameter, cut the stalks in half lengthwise. If you dont halve the thicker stalks, once the delicate leaves are cooked the stalks will still be raw. George trims the bottom of the yau choi stalks before washing and then dries the vegetables in a salad spinner.

I've tried stir-frying yau choi in a skillet, but the wok is preferable because its deeper bowl shape makes it easier to stir-fry bulky vegetables. This combination of oyster sauce and fish sauce is also delicious with other greens such as Chinese broccoli and bok choy. If the vegetable seems dry in the wok, George swirls in 1 to 2 tablespoons of white wine or sake.