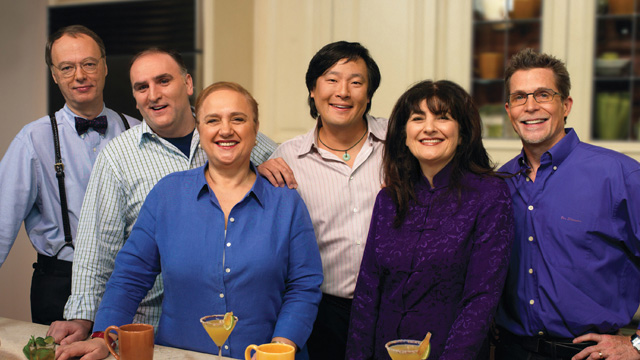 "A Moveable Feast with America's Favorite Chefs" was a 2009 special that salutes cooking traditions across the globe and represents the diversity of food and culture that make America the world's great melting pot.

In the spirit of a progressive dinner, each chef cooks up a single course to create a complete moveable feast that starts with appetizers and ends with dessert. Featured public television culinary experts include: Ming Tsai of Simply Ming, Ruth Reichl of Gourmet's Diary of a Foodie, Lidia Bastianich of Lidia's Italy, Rick Bayless of Mexico: One Plate at a Time, Jose Andres of Made In Spain, and Chris Kimball of America's Test Kitchen.

"We're thrilled to bring these chefs together for the first time to share their version of a pot luck dinner with public television viewers," says executive producer Laurie Donnelly. "With dishes that range in difficulty from kitchen novice to culinary expert, there's something for everyone. We hope our Moveable Feast inspires viewers to roll up their sleeves and share some of their own favorites with family and friends."

A Moveable Feast with America's Favorite Chefs first heads to Blue Ginger, Ming Tsai's restaurant in Boston. Master of East-West cuisine, Ming prepares Ginger Syrup, the basis for his Golden Ginger Thaihito and Ginger Margarita. Then, Ruth Reichl picks up the tongs and presents some quick and tasty appetizers, including Shrimp Curry in Lettuce Leaves. Taking a quick drive over the bridge from Manhattan to Queens, Lidia Bastianich transports us to Italy with her delectable "primi" dish-one of her trademark pastas featuring freshly made pesto.

Heading west to Chicago, Rick Bayless-the man credited with helping to bring authentic Mexican cuisine to America-makes sure the carnivores don't feel left out. He creates a memorable Mexican dish, Cafe Tacuba-Style Creamy Chicken Enchiladas. Then, for a recipe flown in all the way from Spain, we meet up with Jose Andres, who prepares a zesty Spanish dish-pork loin baked in sea salt with sliced Spanish-cured ham. And to end on a sweet note, Christopher Kimball brings the whole group back together for a Skillet Apple Pie-a classic American dessert that can't be beat.

A Moveable Feast with America's Favorite Chefs concludes with all six chefs sharing memorable stories and sampling each other's dishes at a one-of-a-kind progressive dinner party.