Food Home » The History Kitchen » Who Was P.L. Travers, Author of Mary Poppins?

Who Was P.L. Travers, Author of Mary Poppins? 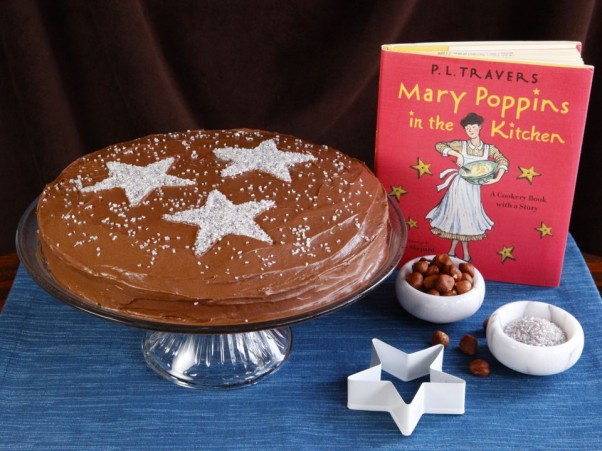 Many unsavory claims have been made about Mary Poppins author P.L. Travers. It is said that she was not fond of children. She supposedly despised cookies and California. She loathed the Disney film adaptation of her beloved Mary Poppins so much that her will forbade the possibility of a sequel ever being made. There are several tales like these, yet it seems impossible that someone so persnickety could be capable of writing such a magical childrens book series. Granted, the character of Mary Poppins in the novels is quite different than the nanny depicted by Julie Andrews. Even so, children have been enchanted with Travers writing for decades. Just who was P.L. Travers, and was she really as cantankerous as weve been led to believe?

Born Helen Lyndon Goff in Australia in 1899, P.L. Travers led a life cloaked in mystery. Even after her death in 1996, the details of her past were unclear. An obituary in the Guardian stated that she was the granddaughter of the premier of Queensland; another in the New York Times described her as the daughter of a sugar planter. While neither of these details are exactly true, we can hardly blame the writers for poor fact checking. Travers had a tendency to bend her life story and make it more attractive, a trait she likely inherited from her father, Travers Robert Goff. He also liked to reinvent his life story; not even his wife was privy to the truth about his past. Goff was a heavy drinker. He spent many evenings spinning stories of a fairytale-like childhood spent in Ireland, though he was actually born in England. Lyndon, as P.L.s family called her, would spend her life chasing her fathers fantasies. Eventually his myths melded with her own version of the truth to create a personal history that was part reality, part fiction. In her early twenties Lyndon pursued an acting career, changing her name to Pamela and adopting her fathers first name as her lastPamela Lyndon Travers. It sounded more romantic, more melodic. She later moved to London as a journalist, adopting the pen name P.L. Travers. Further veils were cast, blurring the truth of her history as Pamela invented a new life that seemed much more exciting.

Pamelas father Travers Robert Goff was a bank manager that had been demoted to bank clerk, though if you asked Pamela she would likely tell you that he oversaw a sugar plantation in Australia while donning a white suit and matching hat. Goffs true career served as the inspiration for Mr. Banks, the patriarch of the Mary Poppins series. Though her fathers actual position was somewhat unimpressive, Pamelas mother, Margaret Morehead, came from a wealthy and influential Australian family (she was, in fact, the niece of the Premier of Queensland, so the Guardian wasnt entirely off base). Pamelas parents often traveled, leaving her behind with her Aunt Ellie. The loneliness she felt at being apart from her parents fueled her imagination; her stories helped to keep her company. From the age of 4 she liked to imagine herself as a brooding hen, and would often sit with her arms folded tightly around her body. This practice would later translate to her writing process, which she felt required a great deal of brooding or pondering.

Pamela has often been quoted as saying, in one way or another, that Mary Poppins was family. This was symbolically true, as she drew quite a bit of inspiration from her own life when writing the books. Several of Mary Poppins quotes, such as anything worth doing is worth doing well, came directly from Pamelas mother. The mannerisms and attitude of Mary Poppins drew heavily from Pamelas Aunt Ellie, who was stern but warm hearted. Bits of Aunt Ellie could also be found in several other Mary Poppins characters, including the Banks neighbor Miss Lark and Mr. Banks own nanny, Miss Andrew. When Aunt Ellie passed, she left her most prized possessions to her family and friends. The list of items reads like the contents of Mary Poppins magical bag, from a candelabra to a traveling clock.

There are many misconceptions about P.L. Travers; this was partly her own doing. She chose to rewrite her own history, making it somewhat impossible to know the real Pamelaor Lyndon, as she was called in childhood. When you begin to peel back the many layers of her story, you find a woman with a colorful imagination who was the product of a strange, stern and sometimes lonely upbringing. No doubt she was frequently a difficult and even unpleasant person, however the broad strokes often used to describe her personality are not completely fair. Did she despise cookies? Perhaps, and yet she included an oatmeal cookie recipe in a cookbook she wrote (more on that below). Was she anti-California? Probably, and yet I cant help but think her distaste for the state was mostly due to Hollywood-based Walt Disney adapting her beloved books for film. As for disliking children, in 1939 she adopted a baby boy named Camillus (one of twin boys from Ireland) who she raised as her own son. In a 1982 interview with the Paris Review, Travers also expressed gratitude to children for including her books in their treasure trove. So she must have liked children a little. At the very least she appreciated them. 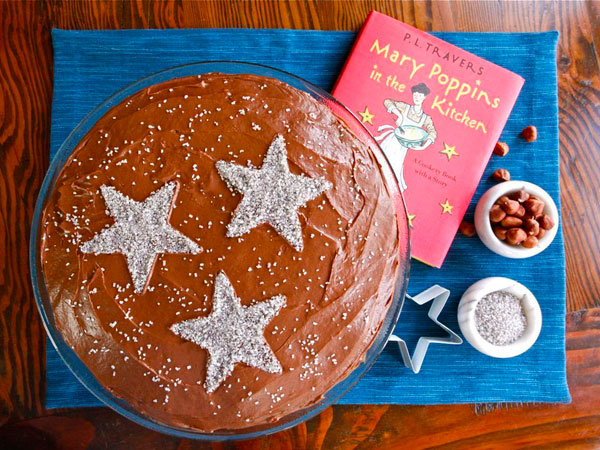 I recently stumbled upon a short cookbook written by P.L. Travers. Mary Poppins in the Kitchen: A Cookbook with a Story, first published in 1975, takes place over the course of a week. Mary Poppins and the Banks children, along with several characters from the series, take over the kitchen and create dishes beginning with every letter of the alphabet.

All that is or was or will be happens between A and Z, says Mary Poppins. And that includes this cookery book.

A recipe for chocolate Zodiac Cake decorated with silver stars stood out above the rest. It produces a simple, thin, nutty cakea short single layer, with delicate slices just right for serving with tea. I used hazelnuts in the batter, however other nuts can be substituted. The cake was a little on the dry side, so I topped it with a chocolate cream cheese frosting which improved it immenselyand of course, I decorated it with silver stars, just as Mary Poppins would do! 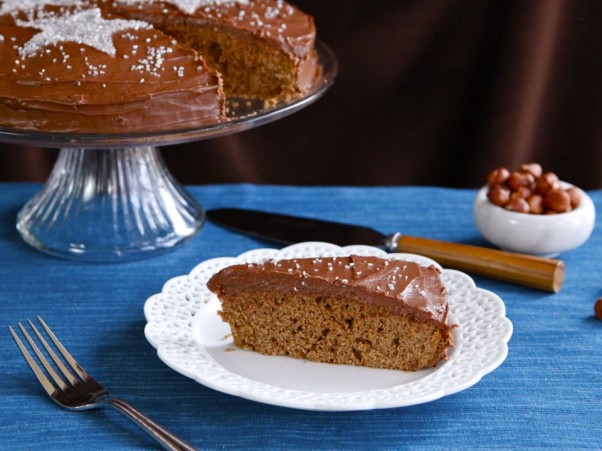 Adapted from Mary Poppins in the Kitchen by P.L. Travers

Chicago Tonight: From Screen to Stage
Academy Award-winning composer Richard Sherman the music he wrote with his brother for the 1964 Disney film. Joining him are the English composers George Stiles and Anthony Drewe, who created new songs for the stage adaptation.